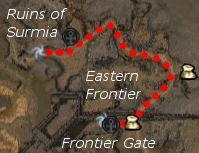 "You're another one of those Vanguard soldiers looking for Prince Rurik, aren't you? He didn't wait for you, but I think you still have a chance to catch up to him. The prince headed north to pursue the fleeing Charr into the ruins of Surmia. Follow the road from the Frontier Gate to Surmia to rejoin the prince and rescue those carried off by the Charr. I directed Captain Miken up that way not too long ago. He might be able to direct you further."

"You've arrived just in time. The prince has already begun scouting the path, and from what I can see, he is prepared to pursue the Charr on his own if need be. He asked that I remain in this area and direct everyone I can find to join him, and I am doing my best to carry out his orders.

Please gather a force as quickly as you can and see if you can catch up with Prince Rurik before he tries to face the Charr army on his own!"

Just follow the path from Frontier Gate to the mission start point and talk to Captain Miken for your reward. There are a bunch of Grawl and Grawl Ulodytes to kill along the way.