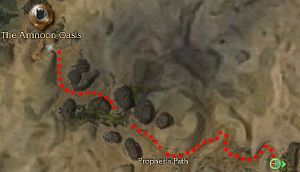 Ghostly Hero in The Amnoon Oasis

"So many have come to this desert wishing to unlock its secret, and all have perished. Were they all unworthy, or just unable to show their worthiness in the way the gods require? I suppose it amounts to the same thing, at the end of the day. Perhaps this time it will be different.

Speak to Great Ritual Priest Zahmut. He can tell you of the test you must endure. You'll find him at Augury Rock to the east."

Accept: "I'm on my way."
Reject: "Perhaps another time."
When asked about quest: "Great Ritual Priest Zahmut awaits you to the east. Speak with him."

"I am he. You wish to Ascend, do you? Many have come before you, and all have failed. May the gods grant you the wisdom to light your way. Three tests await you in the desert. Seek and you shall find."

If you have already been to Augury Rock, you can just map travel over. Otherwise, exit into Prophet's Path and head in a south, then south-east direction until you come across some Teleporters. After crossing, follow the quest marker eastward and enter the outpost. Speak to Zahmut to claim the reward.

For a complete guide on getting there, see The Amnoon Oasis to Augury Rock.