The Scepter of Orr 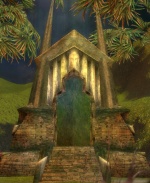 Tomb where the scepter was buried in Majesty's Rest 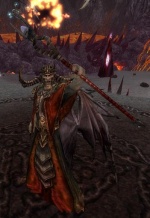 The Scepter of Orr is a powerful artifact that plays a major role in the events of the PvE campaign in Prophecies. The Scepter is a remnant of the human kingdom of Orr which was destroyed in the Cataclysm. It is revealed in the quest The Hallowed Point that the Scepter of Orr and its sister staff the Staff of the Mists were granted to the great nations of the world as protection. The gods themselves were forced to intervene, when the users of these relics abused its power. The gods struck down both leaders and sealed the scepters within their tombs. The White Mantle were able to locate the tomb in which the Scepter of Orr is sealed and unearth it. Upon its excavation the Undead began a merciless assault on the lands of Kryta in an attempt to gain control of the Scepter. The Lich Lord, leader of the undead, will stop at nothing to get the Scepter.

At the end of the PvE campaign, the Scepter is whisked away, and its location is, once again, unknown.

Note: The Scepter is a bundle that does not go in the inventory but instead must be carried by both hands. This disables any bonuses by weapons or off-hand items. It also means a player cannot attack while holding the Scepter though they can still use non-attack skills.

The powers of the Scepter of Orr[edit | edit source]

Tip: It's a good idea to drop the Scepter when in battle because +10 maximum energy to everyone in the area is probably more useful than +1 energy regeneration to one person.

There is a reference to the Scepter of Orr in The Desolation in the Nightfall campaign.

Quest Name: The Cold Touch of the Past

The quest dialoge describes the Scepter of Orr as one of two "twin" scepters. The other, unknown of until now, is named the Staff of the Mists.

"Servants of the fallen one wander across these lands in search of some way to free their master. Once my people were many, and strong enough to stop them, but now I am one of only a handful who remain.

The Margonites draw closer to finding what they seek. If they are not stopped, they will wreak havoc upon this world. One such demon seeks an ancient relic known as the Staff of the Mists. The scepter and its twin, the Scepter of Orr, were created long ago, when this desert was still an ocean. The Staff of the Mists contains great power, and allows the wielder to bend the fabric of reality. If the Margonites are allowed to possess the scepter, they will be unstoppable. You must find the scepter before they do at all costs. The Staff of the Mists lies buried beneath an altar in the southern regions of the Poisoned Badlands protected by ancient magic."

During the course of gaining the Asura as allies, the necromancer hero, Livia, informs the player that she is seeking the Scepter of Orr. During the end cinematic, she is seen to have found it.