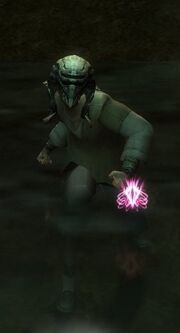 A "Scythe of Chaos" during Dragon Festival 2007

These powerful mesmers specialize in energy drain. A few of them can quickly drain the energy supply of any caster. These are not to be confused with the Dervish version of Scythes of Chaos, creatures found only in Elona. While both are Torment creatures, the Mesmer variant cannot be targeted by Lightbringer's skills. Even when found in Elona, does not count towards the Monster Hunt bounty. A likely explanation for this distinction is the fact that these Scythes of Chaos are apparently servants of Dhuum, while the Dervish Scythes of Chaos are servants of Abaddon. The only exception is level 18 Scythes of Chaos, which are vulnerable to Lightbringer skills.