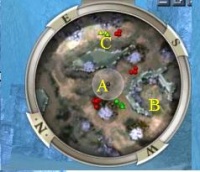 Reaper of the Ice Wastes in The Underworld

"The ranks of the ice elementals which serve as Grenth's palace guard have been depleted by this latest attack by the Terrorwebs. I will call for the Ice King to summon a new defensive force. You are needed to protect the Ice King during his ritual, and to ensure that the Terrorwebs do not use this opportunity to strike at me once again."

Accept: "You can count on me."
Reject: "I have my own troubles."

"You have done well. This new horde of Ice Elementals will keep the Hall of Judgment safe."

Once you accept this quest, Terrorweb Dryders and several Skeletons of Dhuum will immediately spawn nearby to the northeast of the Reaper's location and will head to their targets. There are three waves that each consist of six Terrorweb Dryders and a few skeletons that immediately break up into two equal groups. One group will head towards the Ice King while the other heads toward the Reaper of the Ice Wastes.

You will have about 30 seconds to defeat each wave of Dryders; if you do not dispatch them quickly, the next wave will approach and can quite easily overwhelm you. Consider splitting the group up and having one half at the Ice King's spawn location ready to intercept incoming Dryders while the other half triggers the quest and defends the Reaper.