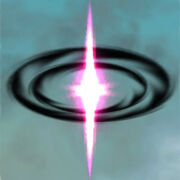 The Shadow Arts attribute reflects an Assassin's skill when using shadow skills. This is not a primary attribute and may be used by secondary assassins.

No inherent effect. Many Assassin skills, especially those related to defense and moving as a shadow, become more effective with higher Shadow Arts.

The Shadow Arts attribute increases the duration and effectiveness of an Assassin's defensive, self-protective and self-augmentative skills.

For example, Shroud of Distress, Shadow Form and Dark Escape are methods for an Assassin to avoid or mitigate the amount of damage received, while Caltrops, Blinding Powder and Return inflict conditions on foes in order to hinder their ability to effectively deal damage.

Shadow Refuge, Death's Charge and Way of Perfection are examples of an Assassin's methods of self-healing. Other such defensive skills include Viper's Defense, which teleports the Assassin randomly away from a melee attacker and poisons the attacking foe, and Heart of Shadow which provides a mid-battle heal should the Assassin receive damage.

Unseen Fury, Way of the Fox and Way of the Lotus allow an Assassin to increase their ability to successfully strike down targets by means of improving themselves as opposed to inflicting Hexes or Conditions on the enemy (Which is mostly covered in the Deadly Arts skill line).

The Shadow Arts line also covers a good number of the Shadow Stepping skills. Death's Charge and Return are useful for getting in and out of battle, respectively. Heart of Shadow and Viper's Defense both involve randomized shadow steps in different circumstances.

Should an Assassin use none of their secondary profession's defensive skills, the Shadow Arts line can make up for this. Many balanced Assassin builds include a few Shadow Arts skills for survival or self-healing.