Shadows in the Jungle 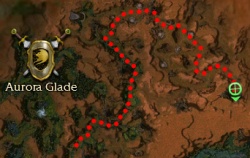 Path to the White Mantle Encampment

Scrying Pool at the Hall of Monuments

The reward is automatically granted upon completion.
Not stated in the Quest Log:

Continue the story of Keiran's journey, as Keiran and Miku finally catch up to the White Mantle detachment in the Maguuma Jungle.

Accept: Show me the story of the broken sword.

Miku: Hey, Keiran, we've been traveling together a while now. So, tell me: what were you doing when we first crossed paths?

Keiran Thackeray: I was... on the run. I'd led off the White Mantle in order to save some people. I lost a friend along the way. And I lost the place I thought I belonged.

Miku: Well, we can all lose things easily. But we can find new things just as easily! You only have to look.

Miku: Ha! That's what you get for crossing me.

Keiran Thackeray: It isn't healthy to be driven by anger like that. Whatever the White Mantle have done, is it worth letting them have such influence over you?

Miku: Well, maybe I'm only upset with myself. For running away when I should not have.

Keiran Thackeray: What do you mean?

Miku: Oh, that's a story for another time, perhaps.

Keiran Thackeray: Looks like they've holed up in this camp.

Miku: I'm certain we'll find what we're looking for here. You up to it?

Keiran Thackeray: It won't be easy, but together we can do this. I'll keep you covered, but I need you in there sowing chaos. Find their weakness!

Miku: Nicely done! It looks like you can rise to the occasion, after all.

He has spoken. You must lead your forces into the depths of the Maguuma Jungle. Shed your mantle and disappear, but do not fall silent. The word of the Unseen must be spoken. While your men disperse, we will lead an assault on Beetletun in the guise of the Shining Blade. We will cast doubt over the usurpers, shake their foundation, and become the poison that seals the fate of the traitor, Salma.

Keiran Thackeray: This is worse than I thought. If only there was some way to be everywhere, to end all of this!

Miku: You know that isn't possible. Keiran, I think you want to take care of everything, and that leaves you with the power to do nothing.

Miku: You need to make a decision. I think that you can be a strong man, and a capable one. If you show your strength, you won't need to rely on others. They'll rely on you.

Keiran Thackeray: If the White Mantle within the Maguuma Jungle flee, then I have to trust that my allies will defend Lion's Arch.

Keiran Thackeray: So we go to Beetletun. Those people need us, and we will not fail them.

Miku: That's the fire I was hoping for. Well said! Now let's get going.

Only after completing the quest for the first time.

Gwen: Something about him has changed. This isn't the...always doting, sometimes insufferable Keiran. He was always trying too hard.

Gwen: And now he's...I don't know where. But he's not here. Have I lost another person I'm close to? How much more can I stand to lose?

Gwen: How can people stand to let someone get close to them, when it's so simple for life to come and take it all away?

Gwen: Is this the kind of person I want to be? Shutting myself off and being afraid to expose my feelings. Maybe happiness is better than feeling nothing at all. Maybe it's worth the pain.

See the walkthrough for Auspicious Beginnings for notes about playing as Keiran Thackeray. Towards the end of this quest, when you enter the White Mantle camp, you will gain a seventh skill, "Find Their Weakness!".

Follow the path through Aurora Glade, until you get to the area where you find the Demagogue during the mission. Defeat all the White Mantle inside the camp, then examine the White Mantle Missive at the east end of the area to complete the quest.