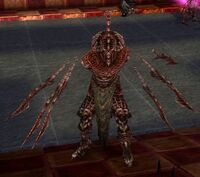 Shiro'ken are spirits of departed mortals that have been summoned back to the mortal world and bound in a physical shell to the service of their master. Shiro'ken is the Canthan name for bound spirits that serve Shiro Tagachi's will.

In Factions, Shiro Tagachi abuses his power as an envoy (which gives him great powers over the souls of the dead), and binds spirits to his evil bidding.

With the exception of warriors and assassins - which look like vaguely humanoid suits of armor with several blades in place of limbs - normal, non-boss Shiro'ken bear a strong resemblance to specific creatures. Despite their appearance, Shiro'ken are fleshy creatures.

Shiro'ken and the creatures they resemble.