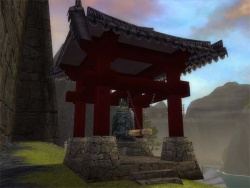 Shrines of Zunraa are - as the name says - holy shrines dedicated to Zunraa, the Kirin spirit who has been protecting the Zen Daijun valley for hundreds of years.

At these shrines players can summon Zunraa by ringing the bell. If he should die, ringing another bell will cause him to reappear.

Several of these shrines can be found scattered across the Zen Daijun valley (see map).

One can also be found in Seitung Harbor. This particular shrine will summon Zunraa as usual, but he will give you the quest An Unwelcome Guest after the completion of the Zen Daijun mission. This quest is the second of the attribute point quests available to Canthan characters.