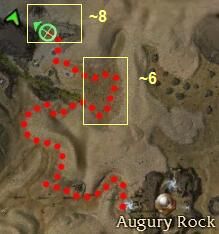 Prophet's Path has about a dozen Kin

Prophet's Path
About 8–10 are located near the Salt Flats portal. Head west Augury Rock into Prophet's Path, turning north as soon as possible. Head east into the basin (slightly easier than using the teleporter) then northwest towards the exit. Zone and repeat.

To the south of Seeker's Passage. Take the teleporter to find an old abandoned town/port filled with Storm Kin.