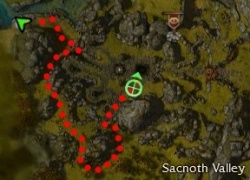 "Well, it's time to clean up that last Charr leader I told you about. His name is Vyrrgis the Pestilent and he is one nasty beast. I've heard he prefers the tender bones of the young for a late afternoon snack. The Charr here know something is afoot after the whole poisoning incident, so we'll need to come up with something a bit more drastic to catch their attention. Don't worry. I've taken care of that part. Just wait for me at the hierophant's stronghold and, at the right moment, rush in there and take Vyrrgis down. You'll know the diversion when you see it, believe me."

Accept: "Diversion, Schmiversion. Let's kill some Charr."
Reject: "Suddenly, I find I don't believe you quite as much."

"Ha ha ha! What great fun. Remind me to ask Vael where he got all those Grawl pheromones... On second thought, I don't want to know."

After speaking with Vael, circle around to the southern exit of the Charr camp, as indicated on the map. Wait until Vael lures a mob of Grawls into the Charr camp with the Grawl Pheromones, then sneak around the fighting mobs and take out the target boss. Once defeated, return to Captain Langmar outside of Longeye's Ledge to claim the reward.