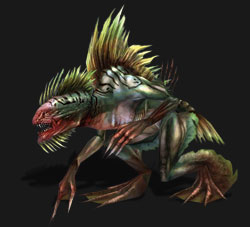 Skale are a species of monsters in the bestiary of Guild Wars.

Skale are humanoid fish creatures who walk semi-upright. There are two general shapes for skale. The more fish-shaped skale (like the Bog Skale in the adjacent picture), and the more reptilian shaped skale (namely found in Elona) like Skale Lashers and Ridgeback Skale. They are likely amphibious, since they are only found in areas close to water, like rivers, lakes or swamps. Also, they have webs between their claws and drop fins.

Skale are usually found in large packs, and players must be careful not to be overwhelmed by their sheer numbers which can make them dangerous foes.

Most Prophecies Skale are Necromancers, however Nightfall skale are much more varied.

Skale may drop the following loot (besides gold and various weapons and items):

Hard mode levels are in brackets.

For an alphabetic list of all Skales, including bosses and quest-specific skale, see category:Skale.

Skale in Istan are sometimes accompanied by Irontooth Drakes or Istani Cultists.