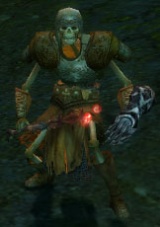 The Raging Cadaver, a typical Skeleton

Skeletons are a sub-species of the Undead in the bestiary of Guild Wars.

Like most undead creatures, they take double damage from Holy damage.

Skeletons are rotten to the bones, so there is no flesh left, which means Skeletons are immune against all skills that target flesh and immune against conditions such as bleeding, poison and disease. Also, they do not leave a corpse that can be exploited by Necromancers.

A large sub-group of Skeletons is the Skeleton Army found in the Fissure of Woe.

Skeletons drop the following loot (besides gold and various weapons and items):

For an alphabetic list of all Skeletons, including bosses, see also: Category:Skeletons