Spearhead Peak is a cold, harsh area that features a giant mountain peak in the center and two ways going around it. The eastern way features more Stone Summit foes while the western way has more wild foes such as Ice Imps, Siege Ice Golems and Pinesouls. When the two roads meet again near Granite Citadel, there will be a very large contingent of Stone Summit forces, although rarely a larger force of friendly Deldrimor dwarves will be in front of the warp instead. The western path also provides one of the two entry points into Grenth's Footprint. 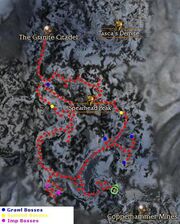