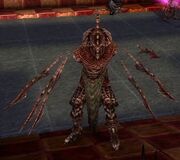 A Shiro'ken Warrior encased in a spirit binder.

Spirit binders are devices used by Shiro Tagachi to capture the spirits of dead mortals and bind them to his service. This allows Shiro to summon a massive army of Shiro'ken.

The spirit binder resembles a suit of brown-red armor with six blades jutting out instead of arms (three on each side). They are first encountered in Vizunah Square, but first explained in Tahnnakai Temple mission, in which they are used to bind the spirits of heroes of Cantha.

Through out the rest of the campaign they can be seen as the devices binding Shiro'ken Warriors and Shiro'ken Assassins. Finally, in the Imperial Sanctum mission, when a player is banished to the mists via the skill Echoing Banishment, the player's spirit becomes encased in a spirit binder and fights along Shiro (the player controls the body that got banished).