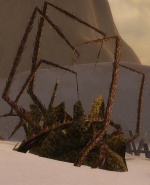 A splinter mine core

Splinter Mines are large plant-like entities found in the Elona Reach mission. When approached by players, a glittering circle will appear marking the area of effect of the mine. At constant time intervals, it will unfold and scatter its thorns causing Crippling and Bleeding on creatures within its range.

The core of the mine (also called Splinter Mine) can be removed and held like any other bundle, and the parent it is removed from becomes inert. When dropped, the core will wait for a few seconds and then explode, causing the same effects, but only on enemies.

During the untimed part of Elona Reach, if a player carrying a Splinter Mine talks to the Ghostly Hero, he says:

Do not trifle with me, child. Bring me the Vision Crystal Shards, not these Forgotten trinkets.

This would seem to suggest that Splinter Mines were built (or cultivated?) by the Forgotten.