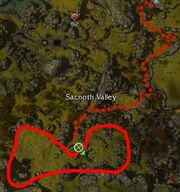 Sacnoth Valley
Leave from Doomlore Shrine; remember to activate Rebel Yell for your encounters with Charr. Head right (west) and kill off the Charr Seekers to reach the Siege Devourer. Capture it and use it to run to Sacnoth Valley. From there, hug the east border until you near the burning forest, then turn west. There's a huge concentration of Grawl in the valleys to the southwest, including two bosses. Use Rragar's Menagerie to rezone.

While these grawl are somewhat difficult to farm completely solo (without H/H), it's still possible. Those who solo should grab the Siege Devourer (above) and should have little trouble getting to Sacnoth in NM.