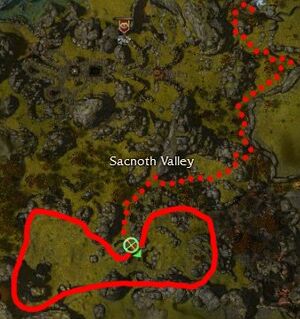 The serious farm takes a seriously long time to reach.

Unfortunately, there's really only one spot for serious grawl farming and it is not close to any portal or outpost. It might be worth leaving a partner player at the portal to Dalada Uplands for fast rezoning, otherwise, it's a long march back to rezone. The drop rate for necklaces is relatively low (compared to some of the recent requests), so be prepared for a long haul.

This week is much more difficult to farm completely solo (without H/H), although it's still possible. Those who solo should grab the Siege Devourer (above) and should have little trouble getting to Sacnoth in NM.