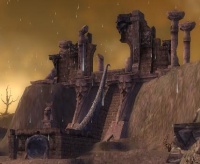 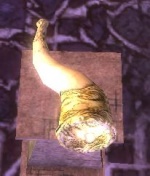 The mouthpiece, as seen in Ruins of Surmia.

Stormcaller is the legendary giant horn that is named after the first king of Ascalon and Orr, King Doric. The horn that is mounted on Horn Hill just north of the city of Rin. It is divided into two parts: the white and golden mouthpiece and the larger horn embedded within Horn Hill.

It was built more than 200 years prior to the present day in the game (before the Great Northern Wall was built) as a last line of defense to protect the city of Rin. It is said that Stormcaller is able to unleash powers capable of defeating any invading army.

It is unclear what all of the powers Stormcaller possesses exactly, but in the Nolani Academy mission, when the Charr attempt to invade Rin and set it ablaze, Prince Rurik invokes the horn which in turn stirs a rain storm that puts out the fires of the Charr and weakens them.