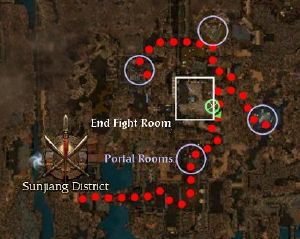 This mission requires the completion of the quest Battle in the Sewers, obtained from Emperor's Hand in the Raisu Pavilion.

The main objective of this mission is to destroy the four spirit rifts that Shiro has opened to summon an army of Shiro'ken. Each of these rifts is guarded by a Spirit of Portals, which must be destroyed to close the rift. Shiro'ken will periodically spawn from the rift while it is open (a different profession at each one), so you should focus on destroying the Spirit as quickly as possible. The ritualist skills Consume Soul and Gaze of Fury can be used on the Spirits, destroying them instantly. The mesmer skill Spiritual Pain is also very useful against the Spirits.

At the beginning of the mission, you will be given the Spear of Archemorus and the Urn of Saint Viktor; they function in exactly the same way as when you first used them in Boreas Seabed and Arborstone. You can complete the mission without bringing either of them along, though they obviously do help. The high damage from a fully charged Spear of Archemorus is especially helpful against the Spirits, as they have increased resistance to both physical and elemental damage compared to normal spirits.

A bridge will come down and the mission will start, there will be two groups of Afflicted followed by an area with large metal vents. These are called flame fissures and they will cause burning and cripple to anyone who passes over them. At the end of that area will be the first spirit rift, spawning Shiro'ken Assassins.

After destroying the rift, proceed to the right. you will come to a high ledge from which you can see Shiro suspended inside a spirit rift himself; he cannot be targeted or damaged. Past this area there will be a few groups of Afflicted with a path splitting to the north and to the east. To the east will be the second spirit rift, spawning Shiro'ken Rangers and surrounded by a couple groups of Afflicted. Careful aggro is necessary here to deal with the multiple groups, and the area is dotted with stalagmite spikes that cause bleeding and crippling. Taking each group individually makes the fight easier. Be careful about line of sight issues here, as the awkward terrain often induces henchmen and heroes to shoot the ground, and thus do no damage.

Continuing north on the main path, you will come to the third spirit rift atop a small hill (which looks like a gargantuan kappa shell), this time spawning Shiro'ken Necromancers. The hill is surrounded with poisoned water, and there is a group of Afflicted which patrols through the area.

The fourth and final spirit rift is to the west, past a few more groups of Afflicted. Shiro'ken Warriors will spawn from the rift, and the plates in this area cause the dazed condition, so casters should be careful.

The allowed 20 minutes are ample time for master's reward. If you run short on time, a lot of time can be saved by assassinating a Spirit of Portals and then running away, without killing the afflicted in the area.

Even without increasing the time limit for hard mode, a group would have plenty of time for master's reward. The increased time limit to 25 minutes is far more than even a slow group should need.

It is useful to avoid melee henchmen, as they are liable to run off and aggro extra bosses at the end. Melee heroes or players are easier to keep back as needed.

At the eastern portal, pull the first group of Afflicted far away before killing them. The Afflicted Ritualist will try to stay back to heal and resurrect. If you run up to it, you'll aggro a second group, and if you try to shoot it from a distance without pulling, awkward terrain makes it so that heroes will just shoot the ground and not do any damage.

After the cut scene, flag your party into the corner, pull the necromancer/elementalist boss, and the ranger/mesmer boss will stay put. If you pull the warrior/assassin boss first, the necromancer/elementalist and ranger/mesmer bosses will also come. If the monk boss spawns, it will step up to heal no matter what else you pull, which would mean fighting all four bosses at once if you try to pull the warrior/assassin boss first. The ritualist boss will stay back on the first pull if it spawns, which makes things easier. If you have any melee characters, keep them back by having them attack the warrior/assassin boss after you pull, so that they don't go aggro any extra bosses.