The city of Surmia was one of the most prosperous in the Kingdom of Ascalon, along with Ascalon City, the Nolani Academy, Drascir and Rin.

Surmia was a fairly young city. It was built approximately 50 years ago, after the end of the second Guild War. The Charr weren't considered a strong threat at that time, and the people of Ascalon made the mistake of building Surmia beyond the protection of The Great Northern Wall. Later they would regret that; when the Charr attacked Ascalon during The Searing, the city was destroyed completely.

Note: This landmark is part of a larger zone; to reach it, enter the zone and walk there. 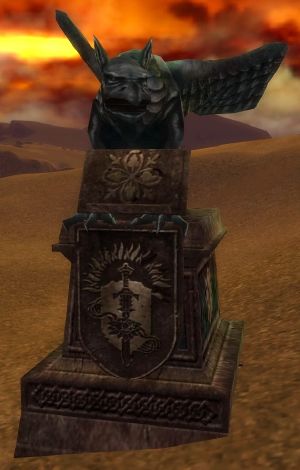 The inscription on the Historical Monument of Surmia reminds of the times when the city was founded:

The city of Surmia is the subject of the Mission "Ruins of Surmia". The following quest takes place in Surmia:

Surmia is the birthplace of the henchman Cynn.

The lines of poetry on the inscription are from Per Iter Tenebricosum by Irish poet Oliver St. John Gogarty.