Sven Gaherson is one of the many Norn hunters in the Far Shiverpeaks that are waiting near resurrection shrines, granting the Norn Hunting Party blessing to players after they have impressed him in battle once. 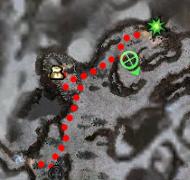 Before the party has defeated him:

"Impress me in battle, then we talk!"

After you have defeated him and you are not yet under Norn Hunting Party:

"My hunting party was sent to clear the area of dangerous creatures. We've split up to make the challenge worthy of our skills. Tell me, would you be interested in killing a few? We could do it alone, of course, but this way will get us all back to the tavern faster."

After you are under Norn Hunting Party:

"The sooner we kill all of the foul beasts, the sooner we can get back to our mead flagons."