Talk:A Meeting With the Emperor

Gah! Capitalisation rules of ANet are not used by anyone else Skuld

I just checked, and the information's correct. I suspect the update just fixed some obscure bug, so I removed the update tag. -- Gordon Ecker 00:50, 3 June 2006 (CDT)

About that vanquishing thing, tried today and killed those two guardians but didn't gave us the whole zone vanquished, there were many more monsters, can any of you confirm?

I tried to vanquish it too, more mobs spawned. I have the quest in my log.

That is incorrect, they might have fixed it somehow, now there are a big mob of npc, PLUS the 2 temple guardians

Lol, me and shadow just did the quest, and there were about 3-4 odd mobs of jade brotherhood, yet we were being told that we'd vanquished the area.. GG anet.. --

Don't Aggro anthing but the two Guardians, the vanquish should work 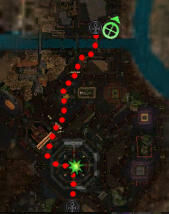 why do people insist on posting large images in-line instead of as thumbnails? >.> Anyway, I took a more westerly route through the temple itself, but still crossed at the same bridge, so the path doesn't really matter until the bridge. —Dr Ishmael