When I did this quest there was a "Treasure Chest" that needed no key. It dropped a gold. I didn't notice the chest the first time I was there, without the quest available. Anyone else noticed this chest? Flesh Over Steel(Talk to me) 20:09, 5 January 2007 (CST)

This is one of the seasonal chests in Elona. Check Treasure Chest. —

I just did this quest, and all three bosses were Hauseh. I will update the page to reflect the possibility that the same boss may in fact spawn three times. -- Elveh 08:14, 20 January 2007 (CST)

I don't know whether the drop of Inscribed Shards from Graven Monoliths has been increased with the resent updates, but I've never before had so many Shard drops as I did doing this quest (alone with heroes and henchmen). And since it is very easy, this is a nice way to get the Shards needed for the Sticks and Stones quest. Note that the Graven Monoliths in the temple area stop spawning after completion of A Show of Force. (TBA 08:32, 5 February 2007 (CST))

On the last shrine Hauseh spawned twice together with Dupek

Well i got 3 of the archane guy -- asianidiot

I got 2 Tahnmaks and no Dupek. I was looking forward to laughing at his name, too. XP But yeah, this is what showed up when I used my cap siggy: 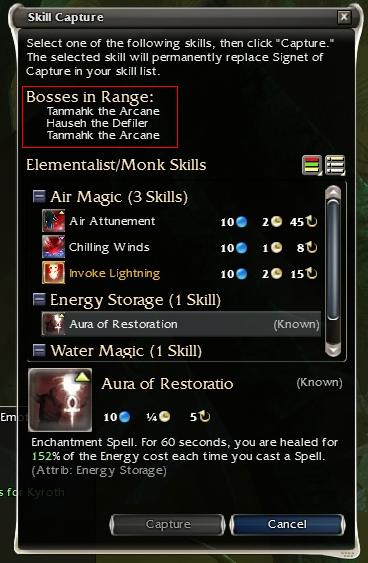 This quest is like so easy, just go with 7 hench/heroes and when you enter the area just click on all the shrines (although you might miss a few in the progress cause you won't be able to see shit). Why let all the monsters out ? Well your henchies will res whenever someone falls and you get no DP effects on the worm. IF however you fail to stay alive an res shrine is pretty close. It would be like hell for the margonites and co if you are able to get the skill Blinding Breath, this would really wipe out the battlefield in a few seconds.--OMEGA-ThundeR 04:44, 23 March 2007 (CDT)

I've done this quest lots of time for lb title in hard mode and everytime i killed the 3 bosses i found a new locked chest in the temple. This happened every time for at least 15-20 run. Should we had this? Ricky

Agree with Ricky although I believe the locked chest doesn't always appear. It is initially not there and appears part way through clearing the shrines. When farming for LB points I skip the first four shrines(on the left) as they are almost all monoliths and don't contribute significantly to the LB farm. Babbage

Well i actually checked and they only appear if before there wasn't already another locked chest... However i prefer doing also the first four because is simple and they always drop at least 1 tome/dye/gold etc.Ricky

In normal mode elemental swords have been reported to drop from ancient elonian chests here in the sulfurous wastes, would this be same case for locked chests in hard mode?

Pretty sure the skins from chests are the same as in Normal Mode. —

Seems Anet have recently gone on a bit of a quest-cleanup drive, as have been seeing a few quests with similar observations over the last couple of months. Yay! --Wolfie

I heard from my friend he farmed this in NM and dropped a Ele Sword, is this true or is he lying? —The preceding unsigned comment was added by Try Not To Kill Me (contribs) 00:37, November 13, 2007.

Would be via just a random loot drop if anything, wouldn't be because of this quest specifically. --Wolfie