Isn't it that only lvl 20 charrs are effected? I can't test is because I'm @ school atm --

I just logged into my level 13 warrior to test and she is affected, so it's not level 20 exclusive. --

Am i the only one noticing that due to how short gwen-chan is, the screen goes screwy when zooming into 1st person view and moving? don't want to add a note if i'm the only one it's happening to. --

Linsey said in-game that they're aware of this, but the only way to fix it would be making her bigger, and the bigger she gets the creepier she looks, so they decided to leave it like that. ¬ Wizårdbõÿ777(talk) 22:35, 1 April 2009 (UTC) 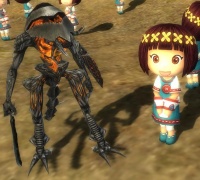 Lol A destroyer pet is bigger than Gwen-chan xD --

Do we need a image like this to show how small gwen is or doen't it matter :P --

How was this taken? Does the form not activate under some conditions?

That, my friend, would be a level one character.

that and the above topic made me think - Someone who's got a gwen mini-pet should take a screenshot of her next to their character :) --

Already saw one. Didn't take a pic tho. If there ever selling a Gwen-chan stuffed toy I sure buy it btw xD -- 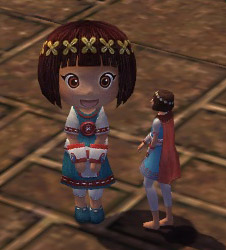 The first thing that came into my mind when I logged in this morning was "WTF????!!! O_O"
The second thing was "I'm soooo gonna make one!" lol RoseOfKali 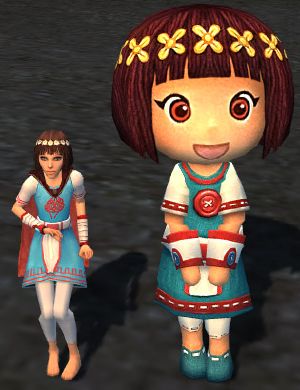 I know it's on the article page, but I think the Flute idea is really cool, and I officially like this April Fools Day because of it. Definitely beats out those fighting stick figures... Skippster 20:41, 1 April 2009 (UTC)

Agreed. Flute is also the only instrument she can play, she ignores the other commands and just stands there. RoseOfKali

Okay, I know Gwen Day is kinna cute, but who Gwen-chan'd up the armor pages and is there any way I can make it actually display the armor? I was going to look at armors for my para, but... Qing Guang 22:41, 1 April 2009 (UTC)

Follow the rabbit down the rabbit hole and you may yet find who is responsible.

Well, someone decided to play the Gwen joke on the wiki as well. It's over now, anyways. RoseOfKali