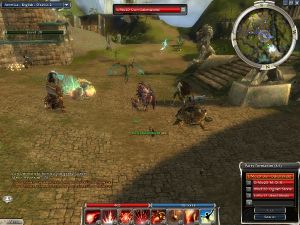 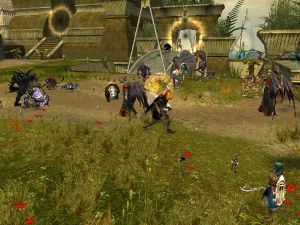 Someone already had posted this in the community portal thinking it was a bug. You can feel free to use that image if you don't want to go through the trouble of uploading your own, entirely up to you, of course :P --

Some of the minis are much larger then player characters, I want to say the minis are actually normal (enemy/mob) sized and not as big as player characters.It is a bit hard to figure out thought, because the minis only change size in towns and you cant use your own characters as a measuring stick because their shrunk.Also, April first is April's fools, not just April first 2010.(the text sound like its saying only 2010)Durga Dido 10:17, April 1, 2010 (UTC)

MIB4u mostly used the description from last years april fools article to start this one. I rather like the wording from the 2008 article myself. If anyone feels like rewording it, feel free to take a whack at it :D --

I am sure we will get some screen shots flowing in throughout the day with all the different miniatures. I hope you don't mind Jorre, I used your image as the article image example, (at least for the time being) -- 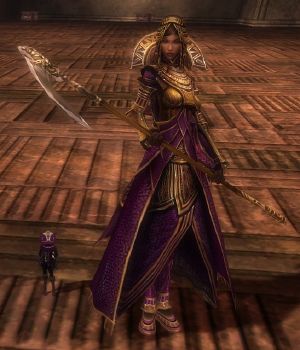 I will put your image on the main page, as it has less background clutter and more detail. --

Paint has terrible compression and causes loss of detail, which defeats the purpose of you taking your screenshots with the bmp command switch. I use Photoshop to edit and save my images. See our armor gallery guide for more image "magic" tips, ignore all the actual gallery stuff unless you plan on making those. RoseOfKali

What's the best mini to use today? Kanaxai?

My Mallyx is having a romp. :P Varesh is cool, haven't seen anything else exciting. RoseOfKali

Some of the smaller minis are huge today. Check the Black Moa Chick and Fire Imp. White Rabbit, unfortunately, is only normal rabbit size. —Dr Ishmael 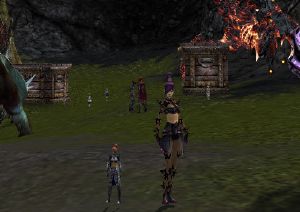 Was it a really tall sin? RoseOfKali

Oh, lol, I see. ANet doesn't know how to use scaling. :P That or they just got to "good enough" and called it a day, as usual. RoseOfKali

One of my characters I play the most on is my female monk (set at the shortest height). I ported into Rata Sum, and promptly lost her among the grass. My ele on the otherhand (also female, about middle/average height) I had no problem finding. So, yeah I think there's a small problem with the sizes...but I freaking LOVE it. ^.^ Really tiny monk, really tiny warrior. Really big "mini" Prince Rurik, really big "mini" Lich. It lead to some interesting time spent in an outpost today. Chibi Moon Shadow 14:26, April 1, 2010 (UTC)
So harsh, Rose. I'd like to think it was intentional, so we have pocket monks that could actually fit in a pocket. Jink 14:28, April 1, 2010 (UTC)

edit-conflicted... by my wife! If I had to guess, I'd say that this was intentional. —Dr Ishmael

Added an illustration of a mini sin. I want one! :] I'm not that harsh, it's just that I've encountered a similar scaling problem with one guy's code when he used scaling incorrectly, mixing up his math operations. Sometimes getting it "right" isn't worth the additional effort, though. RoseOfKali

I love what Anet did for this year's April Fools. As I said on the update feedback page, I guess all [1] those[2] people[3] who kept begging for miniatures for their characters finally got their wish... kind of. However, I am rather sad that they didn't have a joke skill update this year. Those have always been quite fun to read, especially since they comment on the game and the various metas. Ah well, we can't have everything. Ailina 15:59, April 1, 2010 (UTC)

Just noticed, there IS a skill update on the guildwars.com site. It's rather hilarious this year. A few of my favorites: "All vampiric skills, when equipped, now cause your character to sparkle in sunlight." "Smiter's Boon (PvP): increased casting time to 5 seconds." "When using a pet skill, your character will now shout out what skill the pet should use. For example, if your pet is named Moachu, and you use Bestial Pounce, your character will shout, "Moachu! Use Bestial Pounce!"" "Fertile Season: changed functionality to: 'If two or more animals of the same type, level 5 or higher, are adjacent to each other, a level 1 animal of that type is created.'" 'Mighty Was Vorizun: changed functionality to: "While you hold the Ashes of Vorizun, you have 50% more 3G coverage, but you cannot use the item you really want to.'" "Weapons and armor now have durability. Durability decreases whenever you take damage or use a skill. When the durability for an item reaches 0, that item is destroyed. Repair Kits (100 uses) are available from the Guild Wars In-Game Store."

I almost peed myself when I read 'Fertile Season: changed functionality to: "If two or more animals of the same type, level 5 or higher, are adjacent to each other, a level 1 animal of that type is created."' Venom20 06:11, April 2, 2010 (UTC)

The only ones that were actually good imo were the "sparkles in sunlight" and "every zig takes off".--

Oh right, you're not American, so you probably didn't get the Vorizun one. —Dr Ishmael

Rofl, I have their cellphone, and I still didn't get the Vorizun name significance 'til now. /facepalm Maybe because I've never used their 3G. Fertile Season was good. ^_^ RoseOfKali

Ah. It all makes sense now. No, actually, just the MwV one :P I didn't like the fertile season one. Also, I do wonder: Why mention a skill that only 0.001% of their players know is actually in the game (but not available to use) like lightning storm?
The "friendly fire" made me laugh though. So did rising bile (vomiting references ftw!) and point blank shot. --

You turn big again when you use a tonic, not sure how to word it for an anomaly on the page.--

Not all of them. Bone dragon is much smaller than the tonic version. RoseOfKali

Ah right, there are huge tonics. Forgot about those. Well, I guess they're human size or a bit bigger, but not much. --