I included Kaswa Webstrider - Elite Capute Vampiric Spirit, only because it's listed on the bosses page that he is found in the explorable area, but I've not been able to verify this after several runs looking for the capture. In the process of looking, I've posted the several bosses I can verify being in the explorable Arborstone zone.--Xis10al 00:19, 14 May 2006 (CDT)

Ignore what I wrote below. I understand now my mistake. I need to get some sleep :P

Although the Arborstone (Explorable) extends all the way to Tanglewood Copse (Outpost), you can't acess this outpust from Arborstone or vice-versa. For this reazon the outpust shouldn't be considered "part" of this area.

I've managed to aggro a group of Stone Kirins down in the water while I was still in the northern part of the areas, i.e. before I had done the mission or even entered the outpost. An A/E/N might be able to use Shadow Step, Ride the Lightning or Necrotic Traversal to teleport down there, but unfortunatly I didn't have the right profession to test it. I wonder what happens? Would you be able to explore the whole area without doing the mission first?? --

I doubt that Shadow Step or Ride the Lightning would work due to limits in how you can move with them; but Necrotic Traversal may be worth testing further. Someone with both it, and rebirth might be able to bring a team down to that area with him to explore it further. --- Barek (talk • contribs) - 10:42, 12 June 2006 (CDT) 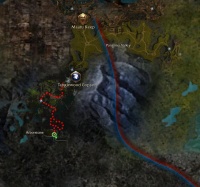 I managed to get down, past the resurrection shrine, through the garden, and all the way to the side gate before I died. Because I was with henchies who were still alive, I had to map out.

If there would be enough players for getting to the Altrumm Ruins without having to do the mission? The gate IS open when you're leaving the Altrumm Ruins (it is NOT being opened when leaving). --numma_cway 17:17, 18 August 2006 (CDT)

It is confirmed that it is possible to enter Atrumm Ruins without having completed the Arborstone mission. It isn't even necessary to use Necrotic Traversal. See this thread on GWGuru for details. --

Cool, though I was trying to not even having ENTERED Arborstone mission outpost ever in the first place d-: -User:PanSola (talk to the

Yesterday I brought a friend, who had just completed Nahpui Quarter (Mission) from Senji's Corner to Altrumm Ruins. I was Luxon and Tanglewood Copse was - of course - not. It is VERY easy when having no Rt and Mo henchmen in the party of 5 to 6 members. Something else may render a suicide because of the Level 18 Wardens impossible. You will have to pull both groups near the entrance. You will be resurrected near the underground library (I don't really know what it is) in the west. This seems to be a long walk. In fact, the only foes you will meet (if you don't go the way with the two bosses) is a medium group of wardens. They may cripple you but don't do much damage. --

In the north-west of this area - outside the cathedral -, there's groups of Dredges (Gardeners, Gatherers, Guardians and Gutters). There's some groups with 3 dredges, and few others with more (4 or 5). The largest groups contains 1 ou 2 Rot Wallow. I'll go back there tonight for more accurate infos. --KarlLycos 09:31, 22 May 2006 (CDT)

It is possible to vanquish this map only with necortic treversal, unless its one of the maps the requiers less monsters then there are. Zorgix 09:40, 22 April 2007 (CDT)

Not true! Starting from Altrumm Ruins you have access to all required areas to vanquish Arborstone Explorable. Rcollins779x 15:00, 25 June 2007 (CDT)
You get this if you enter Arbortone explorable in Hard Mode from Tanglewood Copse:

Confirmed - enter area in HM from Altrumm Ruins and Arborstone can be vanquished without the upper cliff area. 310 +/- if you don't pop all the stone columns. Capella the White 11:00, 27 Nov 2007

In addition, it is advisable to dump Kurzick faction before vanquishing as Kurzick Blessing yields 10 faction per kill (including minions if you minion master dies) and an additional 250 faction per boss.

Tried to use Necrotic Traversal -- no go (the spell is invalid) even when Stone Scale Kirin and Dragon Moss were killed right next to us (but at the bottom of the cliffs) and despite the fact all other spells worked just fine. I had hoped that maybe not all monsters to the south of Tanglewood Copse spawned, just the ones you could see from the cliff tops. So, the warning (in SarielV's image, above) means it -- you must come in via Altrumm Ruins! GW-Susan 22:10, 9 February 2009 (UTC) As a consequence, and having tried again with Consume Corpse, I removed this reference from the main article (near the top). GW-Susan 00:50, 14 February 2009 (UTC) One further point, as per note in article about being Luxon, getting killed and spawning at interior shrine--this does work, and shows (so far as I could tell) all the monsters are there, in addition to the large sets of Wardens up by Tanglewood Copse. I did not re-vanquish to see if number of monsters is, indeed, higher. GW-Susan 04:20, 17 February 2009 (UTC)

316 foes to vanquish here, no quests active. Becomes 320 if you kill the 3 cranes in the water and the 1 white tiger north of one of the shrines. --

Where do these guys spawn here? I vanquished this area and didn't encounter them at all.

I've been through here many times and never has a chest spawned for me. Does anyone know if this area is exempt from chest spawns because of all the farming? Has anyone ever seen a chest in this area?

Agreed - I found 5 today in HM - they do tend to spawn in less accessable areas. Capella the White 24 Nov 2004

Personally just had him spawn for me during Song and Stone (oddly enough got his green as well :s), therefore changing the article unless someone else disproves me Konrad 15:39, 2 March 2008 (UTC)

I had to kill 338 hostiles without song and stone active if thats more helpful for people looking it up?

Are you sure the world had Favor?

Blood Spike and Lingering Curse. Not bad at all for one area, imo

Appearance of the zu Heltzers[edit source]

I just entered this area with no Echovald Forest quests active, and in the first area just past the first res shrine, no foes spawned. Instead, Redemptor Karl was there giving some lecture to Selik zu Heltzer, Bruna zu Heltzer, Nadetta zu Heltzer, and Rald zu Heltzer. There is only a page here for Bruna. Anyone know what this is all about? --

That sounds like Song and Stone. Are you sure none of your hench had that quest active? ;-) Do you remember any of the dialogue? Were/are they still there upon return? I just checked the GWW pages on S&S and the explorable area and didn't see any notes about this either. I do remember during Stone Carving farming that this would sometimes happen... and that if anyone in the group dropped S&S we would see Wardens again in the entrance plaza. (However, my memory is not what it used to be, so... I am curious as to what other data you have available.)  —Tennessee Ernie Ford (TEF) 04:01, October 4, 2010 (UTC)

Well it's not that I just have no quest active, but on that character I have completed every Echovald Forest quest available. For repeatable quests, I have done them all at least once. Also for that character, there are significantly less foes, around 250 for a vanquish. For any other character I have that has not completed any quest, the spawn is normal (over 300 foes). --

I've attempted to document the details for triggering how the extra stone guardians are released. I'm including a few more details here, ...[in case it comes into question later]

(in response to someone saying the trigger is killing 53+ foes)

When Nick wanted Stone Remnants, I could force the the statues to spawn without killing anything more than the bosses. There are three triggers: (1) killing (or perhaps nearing) the boss(es) on one side; (2) crossing the opposite ramp close the HzH portal; and (3) nearing the pillars of the yet-to-spawn stoners. I did this with the singer quest active (which means at most 5-6 foes to kill to reach both sets of bosses); I don't think there's any need to kill non-stone foes.

(I tested with and without the singer quest active. Also, by visiting the caster bosses first and by visiting the Warrior boss first. The triggers worked consistently w/o extra killing.)

If you have killed 53+ enemies, there's a very good chance that you have met the first two requirements. A good test of triggers (1)/(2) would probably to send a runner left from HzH, letting it get close to the caster bosses, and then sending them back right towards the other side. If killing is required for (1), you can party with anyone who has the singer quest active, then soloing any of the caster bosses.  — Tennessee Ernie Ford (TEF) 22:26, 15 August 2010 (UTC)

s/HzH/Altruum/g :P Also, fixed the notice for you. —Dr Ishmael