This article is titled "Armor Types", and "Armor" redirects here. But for some reason, I feel like it's better to have an article on "Armor", and if necessary, have "Armor Types" redirect to "Armor". At least, some content in the current article are about the basics of "Armor" and not about "Armor Types". It also feels ambiguous what the "Types" in "Armor Types" refers to. At least seeing the names of section 2, 6, and 7 ("Collector Armor", "PvP Armor", "Special Events Armor"), makes it seem that "Collector Armor" as a whole is considered one "type" of armor (as opposed to each profession's collector armor being an individual type), and "PvP Armor" as a whole is considered one type, etc.

For an article that is titled "Armor Types", it also feels awkward to scroll down at least a full page to find the section called "Types of Armor", which is the 4th section, and not having a Table of Contents (Why NOTOC for this article?). The word "Types" within the context of this section does seem to be referring each armor set as a different type, which is in conflict with the feeling I get from section 2,6, and 7.

Some stuff I would suggest, but I'm not going to feverently defend them if anyone else opposes (esp if you state why you oppose it):

I agree to all of the above, I have been wanting to bring that up for ages. This should be Armor not Armor Types. I'll do the TOC change because it's benign, I'll wait to see what others think regarding the rest. --Karlos 20:20, 3 November 2005 (EST)

I did some restructuring for the page, including collected several sections into a new "Obtaining Armor" section. Makes it feel more organized, I think. There are still some little stuff that bug me, but I'll fix those later. -PanSola

As kind of a follow up to this old topic, I have since realized the term Armor itself serves as two different meanings in the game. It's rather annoying )-: -PanSola 03:22, 5 December 2005 (UTC)

So it resembles more like the corresponding secgion in Weapon. Most of the textual description being removed already exist in other relavent articles anyways. If no objections, will do it in 7 days. -PanSola 21:37, 9 December 2005 (UTC)

There is no way to verify that armor is chapter one only at this point in time. Putting it under a "chapter one" heading is misleading. It is entirely possible that somebody with only chapter 2 can purchase this armor from a Canthan armor crafter. —Tanaric 23:25, 20 January 2006 (UTC)

Totally agree. Additionally, some armor for some professions might be chapter-specific while the profession isn't. I don't want to find monk armor split into to tables in different parts of the page. It'd be better to label individual profession, or individual armor as chapter-specific (IF we verified it is), as opposed to splitting the sets by chapters. -PanSola 23:55, 20 January 2006 (UTC)

The "there is never anything under it" just started recently, as Skuld is nuking the item value template.-PanSola 13:13, 2 March 2006 (CST)

Here's the stats for all the chapter 2 armor sets for the core proffessions.

Legionnaire's
Cuirass / Leggings / Gauntlets / Boots
Armor +10 (while in a stance)

Sentinel's Helm / Cuirass / Leggings / Gauntlets / Boots
+20 armor vs standard, no +armor vs physical
Armor -20 (while Strength is below 13)
Strength +1 (Stacking) (helm only)

It might also be worth noting the chap 2 pictures of the standerd armor of all 8 classes, as shown in the IGN interveiw. -- TheDrifter

If you're talking about this article [1] then those aren't the standard chapter 2 armor sets. The Assassin is wearing Infiltrator's Armor and the Ritualist is wearing Mystic's Armor. As for the others, based on the icons on the PvP character creation screen, here's what they appear to be. -- Gordon Ecker 17:16, 13 March 2006 (CST)

Also, based on the icons in the pvp character creation section, the Zaishen henchmen appear to be wearing the following armour sets. -- Gordon Ecker 16:36, 18 March 2006 (CST)

huh, I'd expected them to be wearing custom-art amors... like the ch1 henchies. - anonymous

I'm not aware of any confirmation of whether or not any specific chapter 1 sets are core. I'd prefer it if we only list armour as core once it's confirmed to be core, since Factions might have alternate starter, basic and collector sets with different names and graphics. Anyway, the renaming of 'chapter 1 sets' and 'chapter 2 sets' to 'armor available in Factions' and 'armor availabe in Prophecies', since it doesn't imply exclusivity. -- Gordon Ecker 15:34, 19 March 2006 (CST)

PS. none of the "Marketplace" armor art are available via PvP. Also, for Rit and Assassin, the PvP armor have 5 and 6 arts respectively, while each of the core profession only have 3 new art. -SolaPan 21:52, 24 March 2006 (CST)

Ritualist 15k armor on the Luxon side was 15k Halcyon's (in appearence, not function - you could craft whichever set you could craft at the 1.5 crafter). It needed bolts of cloth, vials of ink, and jadeite in the same amounts shown in that picture. On the Kurzick side it was tanned hide squares, vials of ink, and Amber chunks. I actually managed to craft the chest piece of the Luxon side.

So you are saying "The PvE Luxon Ritualist 15k armor looks like the PvE 15k Halcyon's armor"? I thought there are only 5 looks of armor for any profession for FPE: "Marketplace" armor, Luxon regular armor, Luxon 15k armor, Kurzick regular armor, Kurzick 15k armor. So Halcyon's armor does not have a unique 15k art, unless I am mistaken. Thus I am confused. -SolaPan 11:06, 28 March 2006 (CST)

I'm saying the name given to the armor was "Halcyon's". I remember the name of the armor being "Halcyon's Luxon piece name" at the crafter. And I just realized where the confusion is here. I forgot that each armor set had its own name but same appearence because this was just a preview event. You are correct that there are only 5 different sets for Ritualist. On a slightly related note, will someone please remind me to screenshot everything when factions comes out. I could have made tons more contributions after the weekend had I taken some actual screenshots. | Chuiu 11:17, 28 March 2006 (CST)

Ah that explains it. In the above we are trying to correlate the PvE Luxon/Kurzick armor art with PvP armor art, which is why I was thinking about PvP. -SolaPan 11:28, 28 March 2006 (CST)

Okay, Mesmer and Ritualist are the two Kurzick armour sets I can confirm, and the Kurzick headwrap is the one that sticks up on both sides. Much of the Luxon armour either looks like something you'd see at a circus (Monk, Mesmer, Elementalist), or like something made of scavanged materials (Warrior, Ranger), and I strongly suspect that all the obviously Asian designs (Legionnaire's, Shepherd's, Masquerade, Archmage's) are Canthan, making the Sentinel's, Disciple's and Battlemage's likely candidates for Kurzick armor. -- Gordon Ecker 19:48, 29 March 2006 (CST)

I assume that you mean the Kurzicks. If they're anything like the Kurzick NPCs then I suspect that most of them would look like goths. That would apply to Sentry's armour and Savant's armour (if dyed silver, black, red or purple), as well as every set of Necromancer armour ever. Mystic's armour doesn't really fit into this pattern, but it does have a lot of black. The Sentinel's, Disciple's and Battlemage's sets don't fit the pattern at all, but not all Luxon armour fits a pattern either, and several proffessions don't have armour that fits my theory for Canthan armour. As for Assassins, the Nightsalker's, Shouded and Vanguard's sets all have spikes or blades on them, making all three candidates for Kurzick armour, while the Saboteur's set is almost certainly the Canthan Assassin armour. Also, now that I think about it, Exlorer's armour looks sort of like traditional Mongolian clothing, making it a likely candidate for Canthan armour. -- Gordon Ecker 08:33, 30 March 2006 (CST)

Okay, I checked some forums and Kurzick Ranger armour = PvP Sentinel's armour. I also remember seeing assassins in the FPE with armour that had large blades on the arms, although I'm not sure if it was Nightstalker's or Shrouded. -- Gordon Ecker 15:16, 30 March 2006 (CST)

Did some more forum browsing and got Warrior, Monk and Assassin, so only Necromancer, Elementalist and the headgear for Assassins and Ritualists are left. -- Gordon Ecker 14:43, 31 March 2006 (CST)

Most of the necromancers in the FPE video were either standing far away or had their backs to the camera, so I couldn't get a good view, but some of them appeared to be wearing the Blighter's armour set, however I'm not confident enough to put it in the list, because it might be the starter armour. Can anyone upload or link ot a screenshot of FPE starter or Kurzick armour? -- Gordon Ecker 22:27, 11 April 2006 (CDT)

Ok, I ventured to the proverbial end of the world and found Vasburg Armory which is apparently the Kurzick equivalent of Marhan's Grotto. There is a 15k armor crafter with some armor that looks pretty slick. Doubt I can afford even one piece by the end of the preview, BUT, I did screen cap the armor offered. Now if someone who is more into the armor pages would actually empty these screen caps into articles, that would be great. Here is the list: 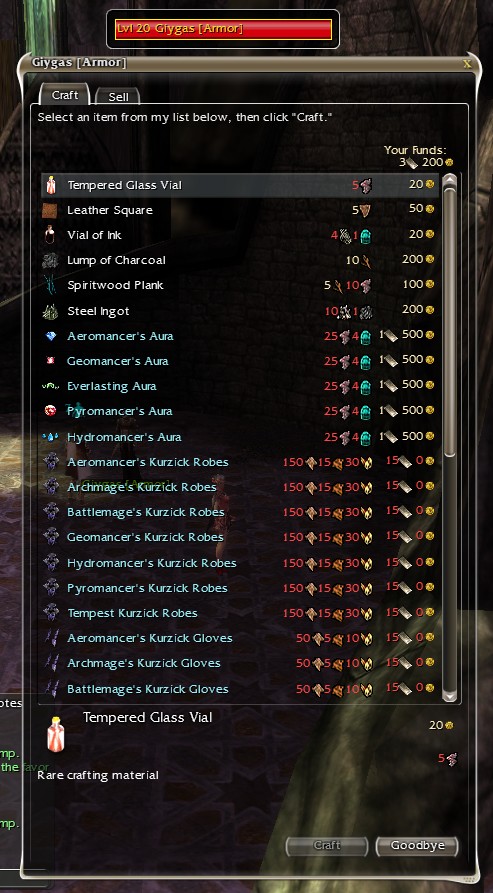 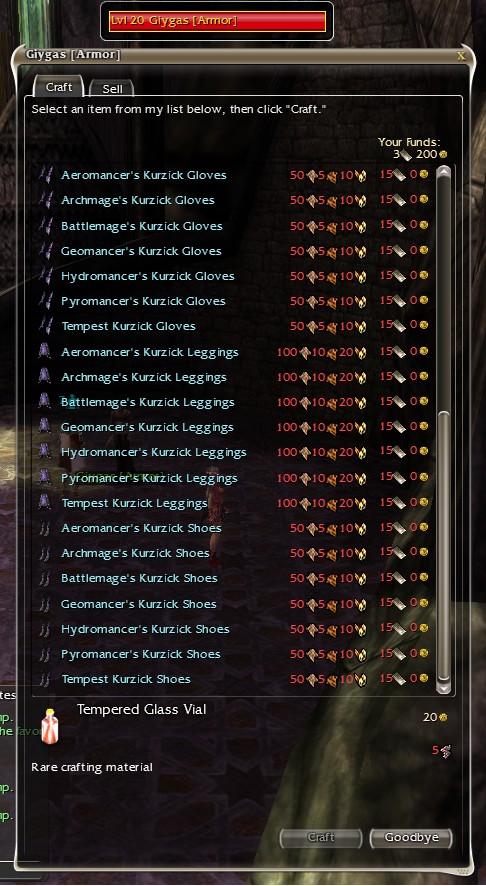 The body piece icon kind of resemble PvP areomancers, but of course that's nonsense cuz the PvP aeromancer is from Prophecies, and the 15k kurzick is mostly new art (besides the other pieces don't look similar anyways). -SolaPan 09:06, 26 March 2006 (CST)

BTW, does the Kurzick 15k armor have same art or different art as the regular Kurzick armor? It is theoretically possible that armor art hasn't been finalized for FPE, since the quests/missions is the main focus. -SolaPan 09:13, 26 March 2006 (CST)

I filled the names in already. The starter arnor of Ele and NEcro are the same as prophecies, please don't re-revert them. -PanSola 01:55, 12 April 2006 (CDT)

Hey guys my tabe on this page is messed up, I looked into the history and it was still messed up, is it only me? 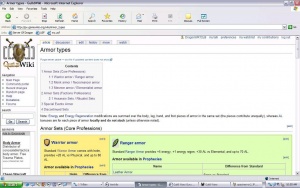 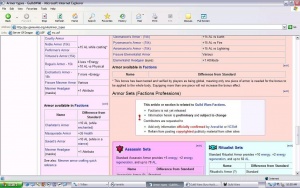 It looks like the thing is messed up because the Assassian and Ritualist tables are jammed in the table of the other. I think it has something to do with the seperate profession pages, one prolly doesn't have the |} that closes the table. --DragonWR12LB 23:55, 31 March 2006 (CST)

Lol. The table is indeed messed up. Someone could easily fix it, but I hate to play 'find the error' games with tables. I will still try my best and fix it if possible. User:Gem/Sig 00:01, 1 April 2006 (CST)

Found it, but Adeyke was faster. Someone had vandalized the elementalist armor page. User:Gem/Sig 00:07, 1 April 2006 (CST)