I still have not been able to locate this skill. No other online resource yet has this skill located. --Draygo Korvan 10:16, 5 May 2006 (CDT)

You may want to check the Divine Path area. I'm pretty sure I saw the assassin boss there using this skill. Chu

Actually I ment Raisu Palace (explorable) which is basically the same thing as the Divine Path area just in different cicumstances. Either way the assassin boss there doesn't have it, I just checked. Chu

Recent update added this boss to the Forest or the Jade sea (probably both) going to find it when I can play GW. --Draygo Korvan 09:39, 9 May 2006 (CDT)
I checked the luxon explorable areas outside of Cavalon and was unable to find this skill in that area. I still have to recheck the entire Kurzick territories, hopefully this skill will be found soon.--Draygo Korvan 15:23, 10 May 2006 (CDT)

My Customer support ticket on this matter has been moved to QA, hopefully we will see a resolution on thie problem soon. --Draygo Korvan 13:39, 17 May 2006 (CDT)

That seems like quite a touchy subject. I don't think anyone will like the idea of a skill that can only be obtained by a few players, and I recommend that the comment be removed until proof is put forward. It could just as easily be found in a challenge mission. - Kingrames

I guess. However every other elite is available outside those elite missions. I doubt that this skill is in any elite mission. I will remove that comment until proof is put forward. Also please sign your comments with four tilde's ~~~~ or press the signature button on the edit menu. --Draygo Korvan 14:21, 15 May 2006 (CDT)

So I'm guessing the attribute line is projected and not proven since its up to 18 and no one has found it in PvE yet?

That is my guess too. There are too many impossible attribute points in the progression table throughout GuildWiki... Though it is possible to check up to 17 via PvP, if there are 20% +1 Deadly Arts weapons. -PanSola 21:38, 16 May 2006 (CDT)

And indeed there are. The preorder weapons include a pair of daggers. Poisonous dragon fangs of dagger mastery. --Kingrames 00:43, 17 May 2006 (CDT)

PanSola just changed it to reflect there is a possible 18. However, I'm very doubtful you could ever see a +1 to deadly arts dagger mod. I say we keep it at 17 untill someone can show us a shield or something with +1 deadly arts on it.

Why are you doubtful of +1 to deadly arts? -User:PanSola (talk to the

Not quite. It should still be possible, just kinda hard to find. For example, I have a shield of +1 Fire Magic and a shield of +1 Strength. It should be feasible, then, for a +1 Shadow Arts and +1 Deadly Arts shield to exist... perhaps even a +1 Critical Strikes. However, finding such is a different story entirely. - Greven 17:30, 19 May 2006 (CDT)

Only thing is, how do we know how much it would do with the blessing? Currently this skill does not exist in PvE and thus cannot be tested with blessings.--Draygo Korvan 17:38, 19 May 2006 (CDT)

Looking for it now[edit source]

Checking the Jade Sea, can anyone check the forest?

I'm thinking its a Yeti since there isnt an assassin Yeti boss already.

Confirmed. However, it seems to have replaced Way of the Empty Palm... while I know there's one other boss who has it, he's only during a particular non-repeatable quest. It seems unusual that ArenaNet would limit its capture in that way. - Greven 23:22, 19 May 2006 (CDT)

beat me to it gr :p Skuld

I was wondering if this could be use to recharge the Celestial Skill in the last two missions of the game. As I'm not there yet, could anyone else check? --theeth 14:23, 28 May 2006 (CDT)

Got a little beef with the wording. Assassin's Promise can remove the recharging of those skills. Take for instance you get hit with distracting shot while using a res sig and the res sig is recharging, Assassin's Promise would make it availible for use. Assassin's Promise does indeed 'Recharge' those 2 one shot skills, but they are already considered recharged after they are used once. In addition such clarification is not given to the skill Oath shot, which does nearly the same thing. I would say the section should be removed. --Draygo Korvan 09:45, 1 June 2006 (CDT)

I just added an explanatory section to recharge. If that survives, it should be sufficient to link recharged in the skill description.

Multiple Assassins on one target[edit source]

What happens if two Assassins use this skill on the same target and the target dies while hexed? Whose skills will be recharged?

Theoretically, the 2nd option is correct -> The 2nd Assassin's skills will be recharged, because his hex overwrote the original one (as you know, a target can't be hexed twice with the same hex, the old one is always replaced by the new. This rule applies to most things).
But, things happen and I can't be 100% sure if what i said actually happens....someone will have to go to Battle Isles and check :) --Torins 08:33, 9 July 2006 (CDT)

Actually, the rule is a target cannt be penalized twice by the same hex effect cast by different casters. I would believe it works like Parasitic Bond, where both casters gain benefit. This is untested theorycraft though, better find two ppl with the skill to test it to be safe. -User:PanSola (talk to the

Further, are the layered hexes invisible? Say, sins A and B hex the target one after the other. Just before the target dies, its ally Remove(s) Hex. When it dies, do A's skills recharge? Kessel 20:45, 5 August 2006 (CDT)

Since nobody had yet answered this question, I decided to test it with Zenmai. Both benefit from casting the hex. VegJed 22:15, 17 November 2006 (CST)

Opening a new related question: Presumably, the second caster sets the duration when they cast it, but if they cast it when there's, say, 1 second left on the original's duration, thus setting the duration higher, if the target dies after the first caster's WOULD have ended, will that person still get the energy and recharge? --Gimmethegepgun 01:01, January 17, 2010 (UTC)

Does this recharge disabled skills? i.e., could you use Avatar of Balthazar -> Arcane Mimicry (on an ally with Assassin's Promise) -> Assassin's Promise, and in that way keep it up all times? Yaki 09:33, 31 January 2007 (CST)

Would it be possible to [Arcane Echo] Assassin's Promise and hex the same person twice before they die and reap the benefits two-fold? Or would it only give it to you for one since it's the same hex? Or, while we're on the matter, hexing multiple subjects and reaping the benefits from them? Just a thought. Dagotta 18:47, 7 February 2007 (CST)

No only one of the same hex or enchantment works on the same guy, but multiple targets would work just fine on a heavy nuking pve team im sure :), im still not sure how it works with multipule assassins though--Blade

I don't think it would matter much if you echoed it. Arcane Echo already costs 15 energy, and that offsets the energy you would gain from a second cast almost entirely. Tegid 15:03, 11 August 2008 (UTC)

I was testing this skill today and it looks like a good skill for a MM if you are running Vamp horrors or shambling horrors. If you have an moderate army your foes die rather quickly and you get the recharge for the long recharging minions. Its also useful for constant veretas aura if you keep killing things fast :P --SkyHiRider 16:20, 14 April 2007 (CDT)

I think you're right, when an mm's fiends all target something that thing tends to die no questions asked. However with shamblings and vamps you only want about 30% of your minions melee so I don't find the recharge an issue. Vsac, if it's no longer bugged, could benefit, or perhaps mark of pain (though one cast alone tends to bring most of a mob down to fleeing health anyway). There doesn't appear to be anything appropriate among the sin skills. Phool 03:43, 15 April 2007 (CDT)

I used to have 100% of undead ranged and zero melee but after the soul reaping update i dont have the energy to keep constantly summoning fiends. And I think its also time to try something different after 1,5 years of mm-ing:P --SkyHiRider 16:06, 16 April 2007 (CDT)

Umz, but the minions just attack the first thing in range... and they kill it in like 10 seconds. Doesnt it take more like 15 seconds to find a target in a humungo group that your minions are attacking to use this skill properly? What if your minions attack a boss? It surely won't die within the time Assasins Promise last... I think this skill would only be useful if you could actually order your minions to attack a certain target.

Yeah. But you should logically use the skill on nearly dead enemies that are sure to die in a few seconds and not on enemies with full health. And why use it on a boss? When the critter dies he inflicts the same effect as the Skill.... --SkyHiRider 17:33, 16 April 2007 (CDT)

You know, I haven't thought of this because soul reaping used to be more useful but this might work, this + SoLS could mean a major energy recovery for the necromancer, gah I should really try this! Wyvern 17:46, 16 April 2007 (CDT)

Use this on a Gank Sin, for example A/W, causes this to be spamable...

This is a good bar for those practicing spikes. If you have a friend that's new to guild wars and wants to play a spike sin, set them up with this build, and have them attack the suits of armor outside the Great Temple of Balth. It can do wonder's for those with poor timing, as they shadow step in, let the chain go, shadow step out, and can instantly repeat. For PvP, I can see no great use for this skill other than training, you can never assure another char's death, and the 45 second recharge can be devastating. The one exception maybe ab. --24.13.163.217 05:49, 20 August 2008 (UTC)

Extremely effective, yet in-efficient in terms of energy consumption. Assassin's Promise would be an interesting test with this :D 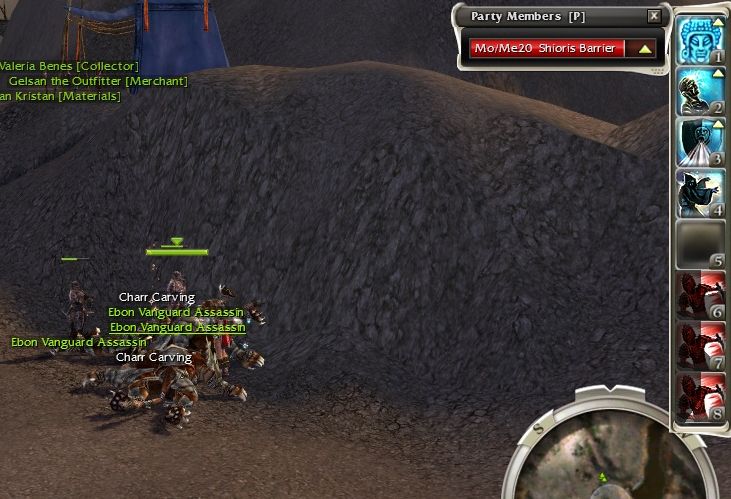 This is a weird question of mechanics, but If you copy someone's AP with Arcane Mimicry, and successfully recharge your skills, is Arcane Mimicry recharged as well, Or does it only recharge if the enemy is killed while AM is recharging? Axelfunx 18:13, 10 April 2008 (UTC)

Anyone know if this works with Lightbringer's Gaze or skills disabled by Diversion? --GW-Seventh 05:40, 6 August 2008 (UTC)

Yes, it does. This skill will recharge anything that doesn't require a morale boost, regardless of its natural recharge or disable duration.