has this one gone loopy or have an invisable pet? :p Skuld

Wierd, she isn't doing it when I get close to animals. I'm thinking there's either a bug that prevents her own pet from spawning or it's a reference to Minsc and Boo. -- Gordon Ecker 02:17, 7 June 2006 (CDT)

Aurora is no longer a longbow henchman. After playing with her, i watched alot of her attacks and since she now has hector she is a Beastmaster Henchmen. She still wields a longbow, but she should have her skillz changed. Stevo101 12:53, 17 February 2007 (CST)

Skill set of boss version is unchanged, still with Barrage, no pet

Confirmed, the boss version of Aurora is still a barrage ranger.I will see if i can get a screenshot of it.-Leader of Armys 09:11, 19 February 2007 (CST) 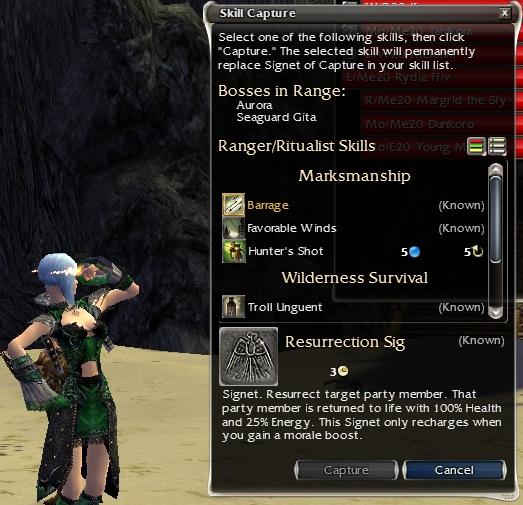 Confirmed by SOC, her boss version is the same. ~Avatarian 86

Acctually I was playing with her in my team, just killed the warrior naga boss in boreas sea bed and hector had died. She used Heal as one to res him. I didn't take a screen casue I didn't think anything of it. Oh and her health was at full at the time she did do this becasue my hero just healed her.

I have been using Heal as One on Acolyte Jin for a while now, and I had noticed the same problems. She seemed to only use it as a self-heal. However, just recently I noticed she acts differently. I've seen her use it when only her pet was hurt, and she uses it to res the pet when it dies, even when she herself is not hurt much. Can anyone else confirm the AI makes better use of the skill now? —The preceding unsigned comment was added by Capsule Computer (contribs) .

I can confirm it, Aurora just resurrected Hector while she was at full Health. I'm guessing that the problem was that the AI only classified it as a healing skill, not a res skill, and, as would be expected, the AI does not use healing skills on dead allies. -- Gordon Ecker 20:54, 16 June 2007 (CDT)