It is highly possible that this quest won't be available once your character has reached Piken Square. Kind of like the War Preparations quest in pre-searing. If this is true, then Supplies for the Duke might a "OR" requirement, which is "Having completed Barradin's Advance, OR having reached Piken Square]]. This is one way to explain why my warrior ran out of pre-Piken quests to do, and still have not picked up Barradin's Advance (and Barradin's Stand). From other discussions, it might be possible that changing secondary profession might reset some flags that might make this quest available again. My Warrior will eventually test this part of the theory. -PanSola 09:50, 28 October 2005 (EST)

Ok, I reverted the anon edit that said you needed to complete Vanguard Equipment before you could get this quest because of this screen cap that I just took with one of my new characters: 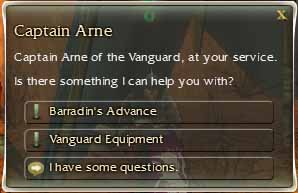 I'm going to change req to "Unknown", because neither quest is available (ie both are unavailable) to my storage character, who picked up "The Krytan Ambassador" quest, went to Ascalon City, and was parked there ever since, without ever completing any quests in Post-Searing nor visiting any other explorable areas or outposts. -PanSola 19:53, 27 November 2005 (UTC)

I believe one has to either advance in the Ambassador's Quests or in the missions. My latest character, the Transcendant One, had this become available after he finished Great Northern Wall, but also after he had gone to Sardelac and did some quests for the shady Ambassador. --Karlos 01:39, 28 November 2005 (UTC)

I couldn't get this quest to appear until after I've completed the Fort Ranik Mission. I was playing a new char (E/Mo) and completed most of the Ascalon (Post-Searing) quests. (I only had "Cities of Ascalon" quest in my quest log.) I couldn't get Captain Arne to offer "Barradin's Advance" until after completing Fort Ranik. --DaveBaggins 04:09, Feb 02 2006 (CST)

I can't confirm this. My char (E/Mo) walked to Fort Ranik and the quest wasn't available. Just after completing Defend the Wall it came available to me. This was also after I completed a lot of old ascalon quest. But before doing even doing Fort Ranik. inactive user 12:04, 14 April 2008 (UTC)