I *REALLY* don't think they're referencing anything with this skill.

I have that game. hahaha--Coloneh

Does anyone know if Blades of Steel counts itself as a recharging skill when doing its damage calculations? - Midnight08

Most likely, as every other skill that requires recharging skills counts itself as one. Detraya fullvear
Just tested. Crits did 38 vs 60 AL target, and if BoS would NOT have included its own recharge would have had only +45 damage. I observed 88 damage on crits with BoS though. Ubermancer 12:23, 14 August 2006 (CDT)

I found the notes to be excessively wordy, so I cut them down to their essence. I removed the note about lowering critical strikes since I wouldn't really recommend that for more situations, especially one where the note is advocating very high energy attack strings. --68.142.14.39 16:00, 14 August 2006 (CDT)

A conditional Death Blossom without the aoe, guess the recharge makes up for it?(Lord Oranos) This skill is better than Death Blossom at 12 Dagger Mastery. At 16 Mastery I agree, but at lower levels this is one of the most powerful dual attacks you can use. Besides, even at 16 dagger mastery you can use both. 149.169.109.224 02:07, 9 December 2006 (CST)

The beauty of this skill (or most assassin attacks) is that, since it's mostly bonus damage and not base damage, the difference between using this skill on a cloth wearer and on a warrior is only about 15 points or so. Zaq 22:29, 11 February 2007 (CST)

Actually my first comment was back when the damage was maximum +80, you can still strike for 200+, but now you need things to go smoothly such as getting criticals or hitting high with daggers during those two strikes Wyvern Afini 14:52, 14 February 2007 (CST)

The high damage is balanced in such a way that this skill has no utility besides it's high damage. Horns of the Ox for example have a very powerful side effect that can make it on par with this skill in the right situation, Twisting Fangs.. Well I don't think I really need to explain the utility on that one. --Esqu 01:40, 25 February 2007 (CST)

This is powerful but you need a reasonably long attack chain to do max damage. It's hard enough to pull of a combo without being distracting shot'd at the last second. The Hobo 02:31, 27 February 2007 (CST)

I've noticed that this skill shows damage up twice above a foes head, and when i've had it used against me has shown up twice on my damage monitor, am sure critical hit chance for each hit is seperate tho, seing as they someth=imes do different amounts of damage, but both are high so it's not like one is the normal strike and the other is the bonus damage... ~Soqed Hozi~ 11:11, 10 March 2007 (CST)

This DUAL attack, like all dual attacks, always hits twice.

Yeah, how 'bout that? Just like one of those huge, disfigured cyclopian beings in...ZOMG ANOTHER "300" REFERENCE!!oneone!! No seriously though, I always thought the icon was weird too. Like Edward Scissorhands but with knives...

A little late in the discussion, but indeed: 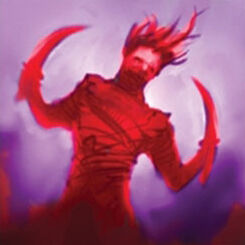 Apart from sharing its name does it have any other relationship? It could very easily be a coincidence. -- Xeon 07:29, 4 August 2007 (CDT)

I think if other skills like Primal Rage have similar notes it's worth it for this one to as well, but in a similar "This skill's name may be a reference to..." format. Perrsun 13:17, 4 August 2007 (CDT)

Primal Rage, Double Dragon, Breath of Fire, etc. are actually well-known games though. How many people have heard of that ice hockey game? o.O The only thing that makes me think it might well be a reference is the fact the phrase sounds somewhat awkward on its own. Capcom 14:47, 4 August 2007 (CDT)

Was it like this: Your arms turn into swords and you slice your enemy in parts? —ShadyGuy

Anyways, I believe some are unique and some share animations. Nine Tail Strike has a very similar animation to Jungle Strike. The Hobo 16:18, 16 August 2007 (CDT)

I might just be stupid, but it seems there is some discrepancy in the table showing how many more dagger attacks are needed to get the full damage. According to the scale, with 13 dagger mastery you deal 15 damage for each recharging dagger attack, which is exactly the same as if you had 14 mastery. however, the table below says that you need 4 recharging dagger attacks (for 13 mastery), besides Blades of Steel itself, to reach maximum damage. This is clearly incorrect. However I do not know exactly where this is incorrect, so i thought i'd just point it out and let another more experienced editor take it from there.07:55, 30 August 2007 (CDT)

Sounds like a bug. The skill's description is pretty clear in that it should only gain bonus damage from dagger attacks; if Malicious Strike gives a bonus, there's a bug in one of the skills. It's worth looking into other melee attacks used with Blades of Steel to determine which one it is; if it does, Blades of Steel is bugged. If they don't, Malicious Strike is bugged. I may test this soon.68.189.248.104 20:02, 4 December 2007 (UTC)

Just tested this and confirmed, Blades of Steel is bugged. Good catch, Hatch. My results at 12 Dagger Mastery, 0 Critical Strikes, and with a plain set of max damage daggers vs. a practice target: 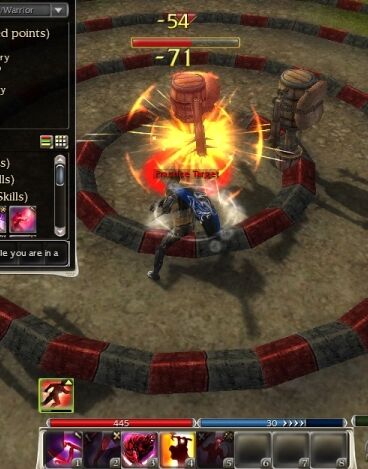 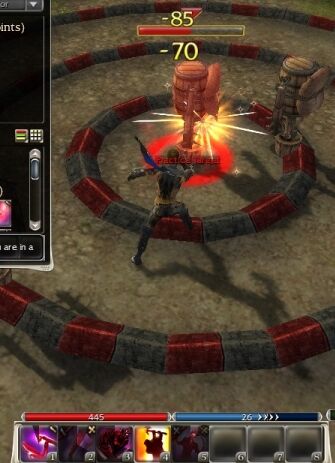 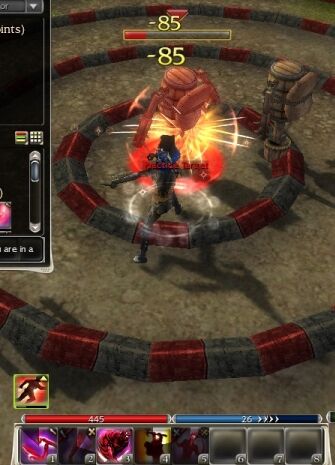 ^^Blades of Steel's damage with two recharging dagger skills and Wild Blow also recharging. Same damage as when I used it while Malicious Strike was recharging.

Most Powerful Skill in the game?[edit source]

Blinding Surge and Blinding Flash would beat it. And besides, it needs a whole chain to be use, that's where its weakness lies.

Cobalt: Zulu was saying you were being Capt. Obvious and thus were stating the blatantly obvious. /grats :) ---

Then clearly Zulu has discovered my secret identity *note to self-zulu knows too much*. However the point i was trying to defend is that, while blades of steel is undoubtedly a good skill, it is not the best, or even one of the best skills in the game in my opinion and does not deserve any kind of special mention as such. --Cobalt | Talk 20:39, 25 February 2008 (UTC)

It indeed doesn't deserve any mention. But who said anything about specifically mentioning it anywhere beyond this talk page? ---

Nobody, i was merely challenging the point made by 69.159.200.89 which was that this skill is the most powerful in the game. I thought a good way to go about this might be to point out its many counters and that, in terms of pure damage, it is still outclassed by many other skills. (this might be a good time to reset the indent ¬_¬) --Cobalt | Talk 20:47, 25 February 2008 (UTC)

Ri is for teh weak. Anyhow, this skill is rather powerful, but Twisting Fangs is so much stronger as a Dual attack, cause of DW (PvP speaking). And for PvE: No-brainer. It's meh, imo ---

(Reset indent) (I am weak! - err...also, thats not strictly speaking a template) Well, to take completely the opposite side of the argument which i admittedly largely started, Blades of Steel can be effectgively combined with impale to benefit from both deep wound and the heavy damage of BoS - therefore negating the need for an additional off-hand attack to trigger twisting fangs, but losing the damage (which is largely made up for by that of impale) and the bleeding (which is no big loss. The only downside being that you need to spread your attributes a little more if impale is your only deadly arts skill. As for PvE...why would you want to play assasin in pve o.O - i tried that once and nobody wants you in their party --Cobalt | Talk 20:58, 25 February 2008 (UTC)

Doesn't matter if it's a template or not :P As for PvE (repetitive...) if you can handle Hero/Hench it's not that hard to win. Besides, on NM everything (yes, literally every frikken thing) is, in one way or another, doable with just H/H. PvE is easy like that ---

Most Powerful Combo in teh gaem ---

You great big noob, that's only the second most powerful. Bow to the true king of damage!