You're right, there's some power creep going on with Necros. Ulcerous Lungs>Suffering. This>Dark Pact. Of couse, Dark Pact was never used too much except touchies, and Suffering mostly as a set-up for FoC. Any comments?Labmonkey 07:36, 29 September 2006 (CDT)

I used Dark Pact. I still think it's vastly superior to most other five energy offensive spells. But this. This is just. Beautiful. Alt F Four 20:05, 16 October 2006 (CDT)
I used Dark Pact with a Grenth's Balance build against Rotscale. It'll still hold it's place for builds intended to sac, but not for more general usage. Rhia Aryx 13:01, 25 October 2006 (CDT)

Before the update, Ulcerous Lungs was basicaly a Suffering with a little longer recharge that caused bleeding vs shouts. Zulu Inuoe 20:10, 2 November 2007 (UTC)

Can this be capped anywhere? I'll check for some enemies before Kadash Bazaar or wherever this is. Skax459

I don't think Dark Pact is dead. Blood does sac less health, but dark pact is more reliant on Damage. Shadow damage obviously ignoring armor- where in AB i seen a lot of armor Mesmer/Eles and Agressor don't do much of anything to these kinds of armor boost builds. But yeah, i do see your point. In most cases- Agressor is probably your best choice, unless ANet wants to boost up Dark Pact's damage out-put. At least to try Balancing the 5% sac difference. Both are still great skills :D --ErrSev

Isn't this kinda related to Jaundiced gaze? Health sacrifice, conditional life steal, and if the condition isn't met it does the same amount of damage instead.--El Nazgir 17:13, 4 December 2007 (UTC)

This skill has great synergy with Masochism and AotL. Whiel using both you will sacrifice 1.25% health [2.5% of your maximum with AotL] and deal a good amount of armor-ignoring damage. Masochism will give you three energy at high levels, allowing you to defeat its meager 5 cost. If a foe is attacking you steal the health, giving you max health once again. If no one objects I will have added this by the time you read it.

For mine, it's very much the same as the picture used to fully display the Star Constellation Orion, which is a hunter holding up a near-dead beast of some sort (depends on which pictures you refer to), going in for the final blow to kill. --Valandil D 04:07, March 17, 2010 (UTC) 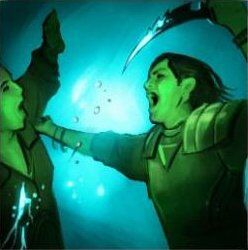