I disagree, for one it is in strength which any warrior in pvp in his right mind never puts many points into; and two, cracked armor is a lot harder to put on a target than bleeding (the warrior class has no skills that inflict cracked armor). I think that this is quite balanced as it is.--

All of the normal EotN skills have been posted on the official wiki and none of the warriors cause cracked armour. --Blue.rellik 08:15, 2 August 2007 (CDT)

I thought Izzy said something about adding cracked armor to some skills (weaken armor, Shadowy Burden?) and maybe penetrating chop would be fitting. Anyways, there are bound to be more skills that get Cracked Armor. Armor of the Sun 17:25, 4 August 2007 (CDT) (again, forgot to sign)
Well I would hope so. Cracked armour has potential and it would be a shame if only EotN skills crack armour. It would make sense for sundering/penetrating blow to crack armour --Blue.rellik 22:30, 4 August 2007 (CDT)

As it is, ONLY Shadowy Burden and Weaken Armor will be changed to cause Cracked Armor. Penetrating Chop/Blow already cause 20% armor penetration. I would think it'd be a bit too strong if instead, they caused Cracked Armor, considering the armor shift (armr*.8 vs armr-20 [min 60]), and the combos they could pull. --Kale Ironfist 01:16, 6 August 2007 (CDT)

Penetrating Chop/Blow can take a casters armor <60, while cracked armor cant. Same thing with Shadowy Burden/Weaken armor, seems a slight nerf to them over all, but with the Penetratings it doesnt make that much difference over all. Luminarus 21:28, 23 August 2007 (CDT)

Penetrating Chop/Blow getting Cracked Armor would finally make them viable on a primary Warrior. In any case...Body Blow is good. Why? For the same reason Executioner's Strike is good!

FATALITY XD .. I think, this should be added, as even street fighter's guile has got his mentioning somewhere else .. -- Kay ..

Somebody put in a bug tag on this skill stating that this attack will only do damage to a single individual while wielding a scythe. Yet in the skill description it states that the target foe is the one that takes damage. The skill is doing exactly what it says it's supposed to do, hence I don't think that it's a bug. Born to Mes 04:53, 8 November 2007 (UTC)

Using attacks like Power Attack will damage all targets, though, not just one. Clearly an inconsistency, if not a bug.

Hm, I guess I could go test that right now

Well here are some test results:

BUT: *Body Blow - only hits one target

So I believe you are right, it isn't actually a bug, but just very precise wording.

Yeah, I was just reading the updates and noticed that it now works properly with scythes. I guess that it was a bug after all. Oh well, not any more I suppose Born to Mes 03:16, 9 November 2007 (UTC)

I still think its a female monk. Doesn't look "chunky" enough to be a male. Aggro

look at HIS hairstyle its a male monk one females dont have baldspots and braids and if its a female then hes groping here :X Lost-Blue 22:22, 22 February 2008 (UTC) 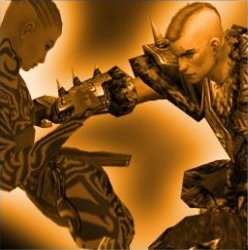 I just can't see that as a male monk (also, the warrior's fist is quite closed) the profile looks female, and if you really want, how about that bra he's wearing? Ezekiel [Talk] 22:50, 22 February 2008 (UTC)

If that's not a female, I'll eat my keyboard. 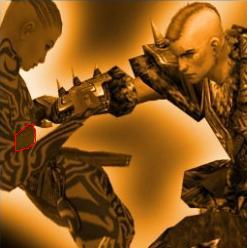 I don't know about everyone else, but I'd have to say this is superior to galrath slash in every way. The damage is slightly higher, the adrenalin cost is lower, and the cracked armor side effect is nice. And, its on strength instead of swordsmanship. Unless you're a tactics user, this might as well replace Galrath or Silverwing slash.

Both of those skills are utter crap and always have been, so I can't think of any counterarguments except that "Strength is a shitty attribute".

They were useful back in the good old days of Prophecies I believe but yes, Galrath/Silverwing aren't that great. While Strength has a bad passive effect, it has some of the best profession skills which more than makes up for it's crappiness - b.r // talk 10:24, 31 May 2008 (UTC)

Just a clarification on the current bug note: In game the skill has it saying 0, but in actual use the deep wound lasts much longer.--Łô√ë

SSHHHHHHHHH! +10, 20 second dw abuse cant last once dervs start figuring it out. Earth, Myst, Wind all have armor cracking, and derv's only non-elite DW is the always cumbersome weary strike... no enchant loss, no enchant required is just gravy. PLz delete all traces of bug recognition from all wiki pages and keep it down.

Lame internet aggression + no sense of humor go together surprisingly often for some reason... I'd say lrn2havsenseofhumor but I can't use leetspeak without feeling retarded. Bug fixed btw, bodyblow goes back to being pretty much a power attack.