I just found a gold max Celestial Shield on the Xaquang Skyway (dropped by a vermin). Has anyone else ever gotten one in this area? - Requinox 15:42, 31 August 2006 (CDT)

I just dropped a celestial shield and a celestial hammer farming vermin. Didn't think to take a screen until too late though. Lojiin 20:46, 18 January 2007 (CST)

Got one from Chest, but we already know that you get one there right? - This sentence is weird^^ => Attempting to do so may create the sound effect of a successful dying, but the dye will not leave your inventory, nor will your shield change color. Ok Ill think on it the next time I want to hear the sound of a dye. -- Zerpha The Improver 19:20, 20 February 2007 (CST)

Let's call everything core then. ---

Well if we have proofs that something drop from the Zaishen Chest then it should be metioned that is core.. --Ricky 15:16, 12 December 2007 (UTC)

Everything can drop from the Zaishen Chest, like from the HoH chest. At least that's assumed. Situation: item X only drops in Factions. It is a 'factions item'. Chest Y appears, and item X is in chest Y. Chest Y is not in Factions area. Item X = suddenly core? Nope, that's not how it works. --

Okok, btw i think that celestial weapons don't drop form the Zaishen Chest, coz they don't even drop from the HoH one AFAIK --Ricky 15:24, 12 December 2007 (UTC)

I just got a req 7 Max Gold Celestial Sheild with +56 while hexed non inscribable has anyone else ever seen a req 7 max gold sheild?

i do have a screenshot actually 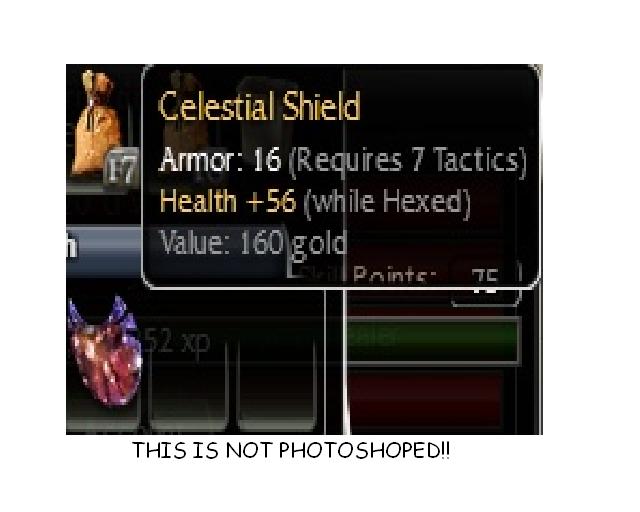 I was aware of the existence of req7 max shields.

I got a gold received physical dmg 5 19%, its a nice lookin shield and if you change the mods on an inscribable one then it becomes perfect anyway so its not a big deal if you want to shell out the cash for the mods, that is

you cant add handles to cele shields? i bought a +45 stance handle to throw on my r9 -2 stance one i found, but i cant add a handle? looks like they have to drop with a handle mod on them? 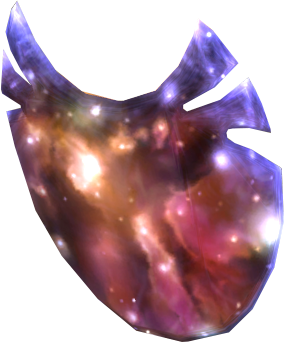