Last night, when I was collecting my data on Ceratadon, I caught one using a monster skill called Chomp:

I haven't been able to figure out what it does, since I haven't seen them use it since. There haven't been any game updates either. A little help here? - Tigress Dragonblade 11:12, 3 September 2007 (CDT)

Dunno what "destroy smaller creature" means, though. Maybe he kills a raptor to heal himself? VSync 00:03, 4 October 2007 (UTC)

Has anyone seen the mini pet yet?

A mini Mad King Thorn would be much cooler!

I know they already have a mini of one of these though. It's a European mini from a magazine.

Spotted on in Rata Sum 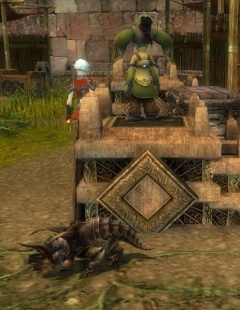 Same here. It's a fairly annoying series of hoops to leap through, but a full day or so after the offer was, uh, offered there still seems to be some stock in the 40,000 or so pets. Kinda makes up for me not getting a pet with my latest edition of PC Gamer. Kinda --Glommon 22:30, 18 October 2007 (UTC)