I just saw this on the Guild Wars Site and since no ones added it yet, i thought i'd get it started. i dunno how to do all the format and stuff, so edit it freely as you wish. i still need the effect and everything, because i havnt gotten one myself. i just know it exists because of the GW website. I'm also guessing you turn Asuran because of the picture, it could have a more specific name. DeathByAnArrow 20:31, 8 January 2009 (UTC)

Very true, im thinking of actually investing in extra cash to get an everlasting one. cause i mean, its my new fav tonic, then phantasmil. screw getting elite armor, ill just be an asuran xD But because of the weekend maybe ill find one myself xD DeathByAnArrow 20:55, 8 January 2009 (UTC)

You knew it had to happen at some point. This is the tonic that pretty much everyone anticipated. Anyway, just glad Anet got around to it finally. :) Ailina 03:07, 9 January 2009 (UTC)

Ahah, just by the name, a lot of people could use that one (especially Wa/Mo :)

The Asura is a bit smaller then the Elf, the only emote it does is /stand. you still need to sit first to do it, but /sit only makes the camera go down like you normally would sit. when you do /stand, it jumps up with both legs up in the air like it was ressed. Lยкץ๒๏ץ talk 18:05, 9 January 2009 (UTC)

Imho, they should put a little bit of effort into these, by making a few standard expressions (dance, wave, few instruments maybe? ) ---

Yeah, that would make tonics overall a bit more fun. I mean, who wouldn't want to see a huge evil golem dancing to the music made by the air instruments of a grentch, snowman and wintersday elf? ^.^ --

True that. I enjoy the tonics and all, and I can understand the limited animations keeping them from being used in combat, but they should at least tack on a couple of extra emotes to make it worth our while. :) Genofreek 05:22, 10 January 2009 (UTC)

That's standard for most tonic forms - /sit then /stand will do the death/rez animation. —Dr Ishmael

When I first saw this appearing I misread it as "Cerberal Tonic", which would be the Cerberus, or two-headed (sometimes more) dogs of Hades. It has absolutely no connection to Guild Wars, but I thought maybe they'd pulled out the stops to make a truly cool tonic. How disappointing. :\

ROFL oh man Cerberal Tonic would be sweeet, but isnt there something that resembles a cerberus in GW? i can see it in my head but i cant put a name or place to it, they look like Kveldulf DeathByAnArrow 16:51, 10 January 2009 (UTC)EDIT: ROFL so i checked the kveldulf page right after i posted this, and its the kveldulf tha ti'm thinking of xD DeathByAnArrow 16:56, 10 January 2009 (UTC)

one of the most adorable things evar! RoseOfKali 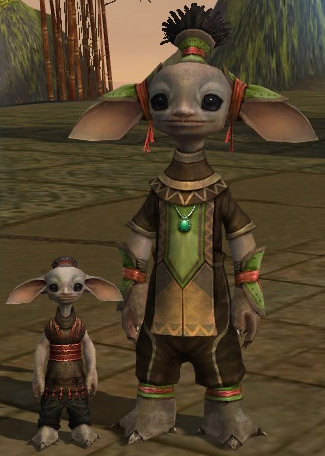 Screens like this makes me want to cry, because of the fact that you can't kill them :'( --

By Grenth Human. You do not understand us --

Grenth does not kill for amusement, he is a wise god. My necromancer has learned a lot from his ways. The only Asura I ever wanted to kill was Gadd, when he used Iron Mist on everything... RoseOfKali

True Grenth doesn't kill for amusement. But I do not only Follow Grenth. I also follow the teachings of Bob and he says that I have to kill every thing that looks cute and can’t defend him self. Also Grenth thought me to look past the Disguise of sweet, innocent and helpless creatures. And see the Demon spawn that they really are. So I have to kill them. The Joy of killing is just something extra. I have to save the world and that is all that counts. Even if it means that I have to (and shall) kill every little critter in the most painfull way. It’s the World that maters to me the most. So in fact I'm saving you and every one. You see my point? --

Please, put on some Taro Leaves and look in a convex mirror. The world will become a safer place. ;) RoseOfKali

Taro Leaves? That’s an other example of the evil stuff in this world that needs to be destroyed (with a Asura attach to it if possible). But I do look good in a convex mirror --