I don't think there are separate reward levels for this mission. The first time I did it, I took over 8 minutes and got the standard reward. The second time, I cut that down to 4:57 and still got the standard reward. It doesn't seem possible to shave off that much more time in order to have higher level rewards, especially two such levels. --Alsatia 15:58, 22 September 2006 (CDT)

I got it down to a little above 2:30 by bringing another human player and still only got standard. I doubt you can do it that fast at level 2, so there's probably only standard available. --Fyren 16:16, 22 September 2006 (CDT)
Just in case it'd need some thinking outside the box, I killed all people there (or so I believe), including the men on both boats, before catapulting them. It took me about 4:50 all in all and still only got the Standard reward too. The only other thing I can think of is having to wipe out all, but under a fast time, perhaps by exploiting the new henchman order interface. -- Jugalator [AB] 16:29, 22 September 2006 (CDT)
Tried it solo with Koss only in 3:31. Standard Reward only..

Done it in 2:23 with only Koss and henchmen. Still only Standard Reward. --

Perhaps the reward levels haven't been implemented yet? Just a thought. —

I'd say there was no bonus. my brother was bugging me that i didnt get masters so i came back at lvl 13 and with 3 lvl 12 heros. i got somewhere between 1:25 and 1:45. i dont think there was a bonus then
That has already been noted on this article. —

I'm not sure how to edit the page to reflect this, but apparently the reward level you get on a mission seems to depend on the number of recruits are still alive. Exor674 02:02, 27 October 2006 (CDT)

I think I can confirm that the reward relies on the survival of the 3 Sunspear Recruits. I just achieved the Masters Reward on my first run through this mission, and a pop up stated "3 of 3 Sunspear Recruits Survived." I did not see a timer on the reward page, so I don't believe time is a factor in this mission, just the survival of the recruits. Presumably, if two survive, you get the Expert's reward, and if only one or none survive, you get the Standard reward. HanokOdbrook 07:32, 27 October 2006 (CDT)

What would happen if you got onto one of the corsair ships via killing a corsair prior to catapulting, and then using necrotic traversal, etc. (after coming back to this mission)? Or would this not be possible?--marcopolo47 21:09, 14 March 2007 (CDT)

Answering my own question here... Yes you CAN get onto the boat, and when you get someone to blow it up, you DON'T TAKE ANY DAMAGE, OR EVEN MOVE WITH THE BOAT! so if u walk towards the end that went up, you can get below the boat, or walk in midair if u go onto the end that sank... interesting find--marcopolo47 22:09, 15 March 2007 (CDT)

Hmm. Can you squeeze out an extra .01% exploration with this maybe? =P 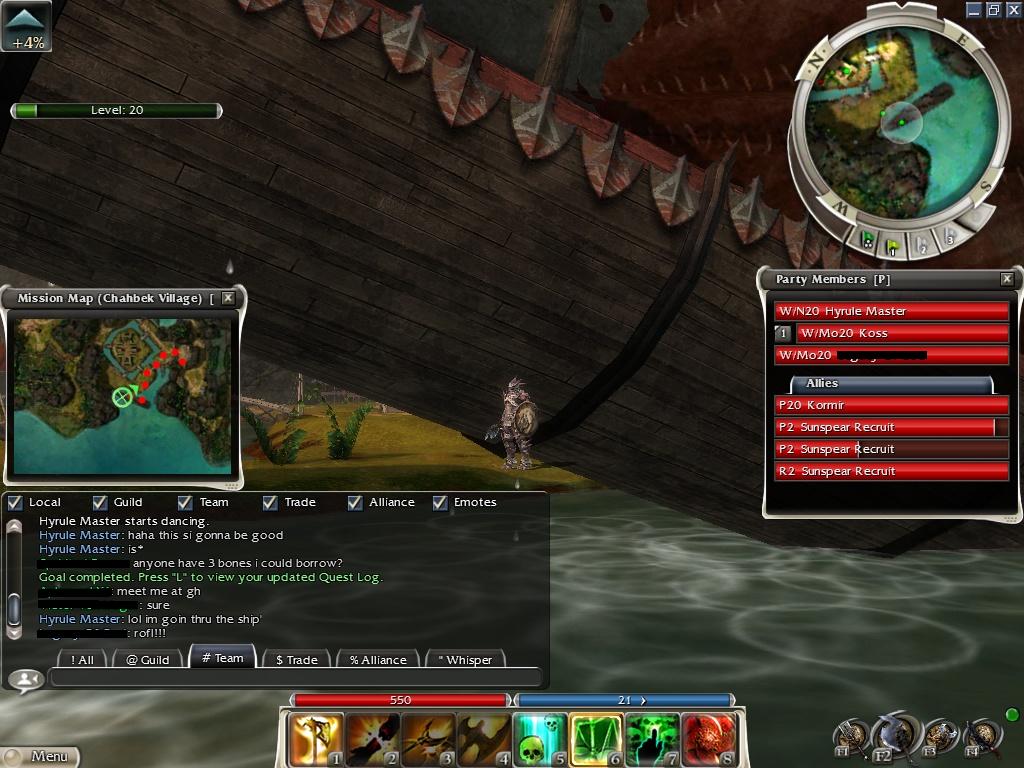 One of your recruits are dieing there, no masters 4 u :P -- Alperu

When I went into Chahbek Village to get some pictures, there were no such monsters in there as "Corsair Healer Recruit" , "Corsair Bucaneer Recruit" and so on, merely "Corsair Healer" and Corsair Bucaneer. As such, I think the Corsair [Insert something here] RECRUIT monster pages are redundant, because it seems as if they don't exist anymore. Anyone else confirm? Swordfish56 00:47, 29 April 2007 (CDT)

Ali: no they dont i think they were changed in an unknown update. they should be deleted really.

How is this difficult? I did it with my survivor :/. Just bring a MM, a healer, Koss and you and you should complete it easily. Cress Arvein

Srsly. This was the first thing I ever did in HM - I was totally unprepared, and I still cakewalked it. Just don't Leeroy the groups in the northwest. —Dr Ishmael

The article hints at the fact that it might be possible to have some of the Sunspears die before completion of the mission. I want to get thru the mission but with no bonus. Any ideas on how it can be done?

More seriously, someone could make some event of who can get standard reward in easy mode the fastest. Quizzical 05:50, 25 October 2008 (UTC)

Just have the minion master sac to death near the recruits. Easy street.