I had a really wierd bug today on this screen, click this to view full size. 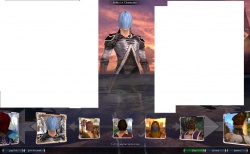 This is a weird question, I know, but it's been bugging me for a while. You can sort the characters alphabetically but that's not their default order, and I can't for the life of me work out what decides that order. It's not time created, name length, or even height. RossMM 06:33, 20 January 2007 (CST)

It's unordered. If you make a character in the (for example) third character slot, that's where it'll stay, even if the rest of them are empty. — Biscuits (talk

It does? As of when was this fixed? In the past, mine have always re-ordered themselves whenever I've create new characters and sometimes when I've deleted old ones (for example, my first ever created character is now in my ninth slot. That character was created at a time when I could only have four characters, and for quite some time had been in in the third slot on the rotating selection screen until I created a new character in the fifth slot (about a month or so ago), at which point that new character ended up in the third slot when I next viewed the selection screen, at which time I found that my first created character had been bumped to the ninth slot). --- Barek (talk • contribs) - 13:28, 20 February 2007 (CST)

Before they introduced the ordering I remember my characters always got shifted to the left. Since the ordering though, my characters have always remained in the same slots. I first noticed this when I deleted a char and the slot stayed empty (instead of moving to the end). I've not seen anything otherwise, although I don't often delete/remake characters. I just deleted the char in my second slot, recreated it and deleted it again, and logged out after each one, and it is as I described. — Biscuits (talk

I'm still uncertain what determines the order, as I created my Paragon in the 8th slot from the left, yet now he is sitting in slot 2 ahead of the first three characters I ever created. However the other characters created since then have stayed in their slots at the far right, implying... I've no idea. RossMM 16:48, 7 April 2007 (CDT)

Mine were reshuffled for the first time a couple of days ago - that was when I created a character in my remaining empty slot. Can't monitor it from now on because I've changed it to PvP/RP.

Same, a couple of days ago mine shuffled. Must be some update. And today they shuffled again... I hope when I'm recreating a PvP toon which is usually in my fourth slot, I don't delete an RP toon -_- -- Nova

I've spent about 30 min just now trying to get my necro (my oldest) to slot 1 again because I made a PvP Para who screwed up my order D:

I so wish for that since they took my beloved ascalonian CSS away! Wouldn't it be cool to put all your chars into that environment or on the Factions pillar again? At least for a GW veteran like me this would be a huge heartwarming present. But as it looks we will have to cope with yet another new CSS with every new chapter... Wiking 11:38, 19 February 2007 (CST)

I'm glad that you uploaded those pictures. I had almost forgotten what the Ascalonian one looked like. I believe that it has been stated by ANet that they could not bring back the older screens as with each iteration they have added new functionality and features to it. I still think that they could, if they wanted to, upgrade the older ones to work with the new stuff, but if the choice is that they work on new in game stuff of this, I'll take the in game stuff. --Rainith 21:42, 19 February 2007 (CST)

Even so, the little things are usually the things that I enjoy the most. I don't care much for all the skill balances or HA changes, it's the smaller things I like. For example, when they took the time to add mouth movements to Prophecies and Factions cinematics that just made me smile :D so if they had the time to do small things like this, even if it wasn't EXACTLY like the old Prophecies CSS it'd still be a nice bit of nostalgia, take me back to the good ol' days. --Blobulator 23:57, 19 February 2007 (CST)

Amen to that, Blob. And of course I take in game advancements over a CSS switch button but c'mon, this is bits and bytes nothing is impossible if it weren't for the time investment. I thought it would be nice to actually see the CSS they talk about in the article and its predecessors. I'm not sure if my putting the thumbs where they are goes so well with the style guide but if no one complains, I don't really care. ;) Wiking 12:10, 20 February 2007 (CST)

Regarding your pics: nice, one thing ,the factions one is missing the factions store :D. And such a button would be nice, the only thing is with the old prophecies one (you would need an option to select only four chars to be displayed). --Phoenix

I don't even remember a store button in the Factions screen, the image must be pre-store then.:) And I don't quite understand what you mean with the second sentence. Wiking 10:49, 2 April 2007 (CDT)

He was replying to the topic of this discussion: that it would be cool to have a button to switch to the old CSSs.

==Notes== *In the GW:EN CSS, if you look slightly to the upper left, you'll see the world ''Lul'' in the Polar aurora. In dutch this means 'Dick'.

It does vuagely seem to slightly spell "Lul" but its extremly hard to make out. I think that guy was just making something out of it --Hawk Skeer

I just checked for myself, and there's no question it resembles the phrase "lul." Even though it probably has no significance, there's no denying that it obviously appears as the phrase without having to look hard at it at all. Darmikau 03:33, 29 October 2008 (UTC)

I rewrote the page to make it a true article instead of a conglomeration of notes. I also removed the stub tag since this article contains everything you can possibly know about the CSS, so it can't possibly be expanded. --Hawk Skeer

Could it be that anet trew geography out the window, why else would there be trees on the highest top and no trees on any of the others.

Every time I have logged in recently all my toons have shifted positions. — Nova

I really wish, on the CSS, there would be a line up in the character summary that displayed the age of your character so you wouldn't have to log into each one individually to see if they've had a birthday. Likai 18:51, 8 October 2007 (UTC)LikaiKailla

Me, i would really, really prefer they add the Date of creation sorting option. I'm sure this would be possible because they keep this date somewhere anyway to give us thoses presents. So, that could put an end to shifting problems. Mines have sifted many times, mainly in the first few years. My first character was my ele and he is now in third position. My second was my monk, he's now iun fith. My third was my necro, he's now the first one. My necro name begin with letter A. I've read all of this talk page. I remember that at the time of the Ascalon CSS, my chars we're alphabetically reordered many times. After that, i think the reordering was always alphabetically for me in the few others reordering occasions. Thoses we're mostly before they add the sorting menu. TulipVorlax 08:56, 14 February 2008 (UTC)

Nope, that's how the textures are designed, since you can't see anything that far down due to the foreground terrain that the character stands on. —Dr Ishmael

Oh, you didn't specify what you thought might be missing. >.> I'll have to check when I get home, but I think the background is an 8x2 array of 512x512px textures, so you would be missing 4 tiles. —Dr Ishmael

I wish we could pick an older screen if we wanted to, or perhaps select one from whichever games we have. That old Proph one looks neat - certainly way better than the one character standing on a stupid platform in the middle of nowhere. *sigh* Qing Guang 23:30, 22 December 2008 (UTC)

That's been suggested to Anet many times, and they've given their usual runaround about how it's not possible with the current game engine/technology. —Dr Ishmael