Interesting... It's not. :) Judging by the annoying Warden of Earth's Churning Earth, I would have thought it's adjacent. But I just made this test: 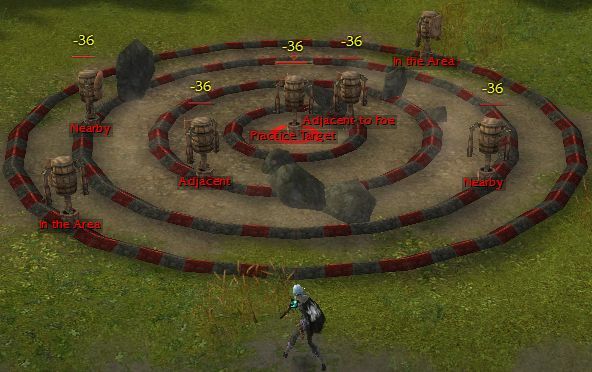 The usage is a pain, IMO. Tried this on a group of "charging" Outcasts. The only way to knock them down, however, was to use this spell in combination with Glyph of Sacrifice. I could, however, imagine this in GvG against an enemy flag runner. Anyone ever tried this? --Ineluki 07:23, 17 October 2006 (CDT)

How in the hell is dash related to Churning Earth? Dash makes you faster, CE kicks your ass on the ground if you're running... they aren't even close. -Auron

Since everything in Hard Mode has a movement speed bonus, would this constantly knock down any enemy that isn't snared? --Heelz 21:08, 23 April 2007 (CDT)

/late. Nontheless, the foe needs to be moving as a hit comes in. So, you can move in a Churning Earth at whatever speed, as long as you don't move when you are hit by this. ---

The Point is not for shameful fear to do the damage (as it is very minimal), but to ensure the target is always knocked down, stuck in the AoE. Try this: Shameful Fear > Glyph of Renewal > Churning Earth > Churning Earth.

The problem is that Churning Earth lasts 5 seconds, and a knockdown lasts 2 seconds. You'll get at most 2 knockdowns with the first combo with a 30 second recharge, and the second is an extremely expensive option (energy and skill slot-wise) to cause knockdowns when Thunderclap + shocking short/flatbow/spear can do so for a much longer period. --Kale Ironfist 05:41, 27 May 2007 (CDT)

Have you ever thought of attunements? Thunderclap saps energy more than anything, and it does no damage. This does reasonable damage and can pin a foe down for 10s. Plus, if anyone else is attacking the target with lightning, particularly melee, your energy is toast. No worries with this.

So you're going to spend 5 skill slots just to pin a foe for 10 seconds... I hate to say it but a Gale/Gust or Water Trident build would probably be more friendly on the energy and skill slot use while still providing a lengthy knockdown time. --Kale Ironfist 23:14, 27 May 2007 (CDT)

For some reason the mini skill bar uses the originally uploaded image of churning earth, and not the most recent one. (or at least it does for me)-Ezekiel 02:57, 5 February 2008 (UTC)

Will skills like Freezing Gust prevent knockdowns even if the target has any kind of speed boost? I suppose it will but this morning I saw a team running Churning Earth along with a water Elementalist.

The enemies need to actually be moving faster than normal. If they have a speed boost but are snared back to normal or lower, it will not knockdown. (prettysure) Ezekiel [Talk] 12:37, 6 June 2008 (UTC)

Could somebody confirm this please? Havnt time to test it myself at the moment