Compass has been updated as of today, new functions include being able to tell specific party members and henchman where to go. The screen differs now when not in a town/outpost. --Dorbian 16:30, 22 September 2006 (CET)

What are the number 1, 2 and 3 flags for? Acglaphotis

Confirmed, in the tryout of this function it was possible to see it though, also the use of the new compass functions should be clarified a bit more are it could save your life more then once ( i know it saved mine loads of times ;) )--Dorbian

Question about Locking the Compass[edit source]

Is it possible to lock the compass so that north is always up, and instead of the entire thing spinning - only your character's arrow on the compass spins?

I've been to the end of the world.[edit source] 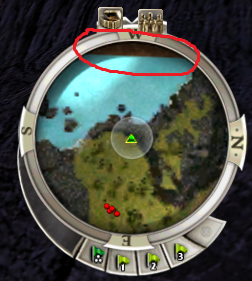 You needed to go that far to run away from those red dots? --Snog