Does Dorian have any elite skills?

Just to make sure. Is it so that he is not counted as boss and does not show up in the cap window? --

You don't remember correctly. You must first speak to King Jalis for the mission to end, so you have all the time you need to explore or skill cap. --

I needed to check. It's so unbelievable in this case. --

When I played it he had no Aura and sig of capture didn't work on him. I didn't notice if he gives moral boost, but since he's typically teh last to die, it seemed not to matter. And yes, mission only end after you talk to the King. -User:PanSola (talk to the

"After Saul D'Alessio died, he became the leader of the White Mantle"[edit source]

There are two possible interpretations:

1. The trivial case. Saul used to be the leader. Saul died. Dorian is the current leader. 2. The successor case. Dorian became the leader right after Saul died.

If it's case 1, I think it should be reworded to remove implication of case 2. If it's case 2, can someone point me to where it is revealed? I totally missed that when playing the game, nor did I notice it in the manual/official website lore. -PanSola 08:43, 9 May 2006 (CDT)

Evidence seems to point to case 1, since there seems to have been an Elder Confessor Schessler at some point. --Valentein 09:25, 12 March 2007 (CDT)

Anyone notice after bloodstone fen mission, dorian is talking and the text on the bottom says something like "they will mete their end" or something. They spelt mete wrong

Dorian just dropped me a pretty thing during THK... 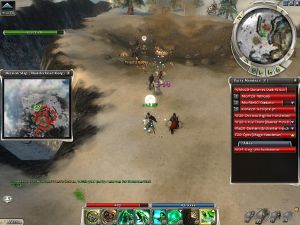 It had a Warrior Rune of Superior Axe Mastery. Was hoping for Vigor, but I'm happy anyways. :)

If you're not happy with it anymore, can I have it? ----InfestedHydralisk

I'm a bit confused what to put under locations. He appears in a cutscene during Bloodstone Fen (hence the category), but he's actually standing in the temple in Riverside Province. He doens't appear during Riverside mission, that's why I used (Location) instead, although technically that isn't correct either. --Erszebet 05:38, 1 April 2007 (CDT)

Well, we all know he attacks weirdly (back-handed staff ftw), but I have also found that he doesn't seem to even use a human model anyways. You would think he is like a White Mantle Abbot or something. But, when he dies in THK, he "falls and rolls backwards". It looks exactly like when you kill a Dark Titan. I wonder if this has any deeper implications?

Only reason he dies like that is because he has not cut back on the Cantha Fried Moa. ^_- -Kalle Damos

I thinks that's the idea. Dorian is also the highest priest and leader of a cult.

The ugliest human character in the whole game?[edit source]

Dont worry, you get to kill him anyway.