Another hat that makes you hair disappear :( TheDrunkenHobo

What does it mean when it says item's attribute +1?

It more then likely means whatever rune u add to it this helm's +1attribute copies. Just like when adding runes to any hero's headgear.

It seems that the Crown is treated the same as Armor, and not a festival hat. Therefore, the festival hat maker can NOT make another should you sell or salvage it. -Lefick

Sounds like common sense. If it was treated like a festival hat, any of your characters, regardless to accomplishments, could make max AL crowns of their own for mere pennies. --SLeeVe 11:49, 8 September 2007 (CDT)

i came to add this but someone else found out first

I agree with JediRogue that it doesn't seem to belong; at least not a single color. However a basic dye chart like in Dragon Mask, Bandana or Chaos Gloves might look better. Perrsun 12:04, 7 September 2007 (CDT)

I agree on Brown + silver + silver, it looks so nice, specially on warriors with matching colour schemes.--— Hyprodimus Prime 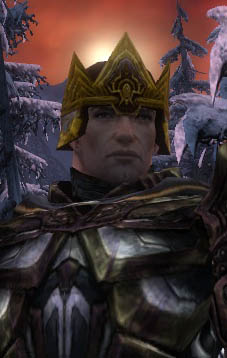 if there is any interest, this is how it looks in low light situations... ~Abbadon321

When I go to dye my crown, it doesn't appear in the dye preview to look anything like the pictures here show it will look like with the same color, and I mean it's a *lot* different, not something you can chalk up to different lighting. If you try red, it doesn't look at all like the red colored crown on this page, but a rather nice gold. If you try yellow, you get something closer to green. Is the picture on the page out of date due to some change in the game, or is the dye preview bugged? Might it be related to the fact that I'm a mesmer? --68.112.142.241 01:30, 26 October 2007 (UTC)

Probably a bug in the system. I dyed it red and it turned out a very nice gold might i add. A little surprising, but the chart either needs to be changed or marked as a bug.--Manbeast15 05:36, 15 January 2008 (UTC)