Drop to be seen here from the end chest: Havok's shield Skin/stats are presently unknown (guildie had to go and left before showing off his find) Yamagawa 21:24, 25 August 2007 (CDT)

Can you not get to the chest if you don't have the Misanthropic Jotun whatever quest active?

Correct, you can't get past the first level without the quest. To get the quest, the NPC should be right outside the zone to get it. Nilator 16:56, 26 August 2007 (CDT)

And is that quest repeatable? Because, otherwise, it seems kinda stupid to have a dungeon that you can only clear once...

I don't think the Norn are supposed to help you in this dungeon. I just got to it, and the way the quest description reads out, They're only observing you kill the jotun that they were arguing over who gets the right to kill it, or whatever they were arguing. - Yossitaru 23:02, 31 August 2007 (CDT)

How do u lower the bridge in the upper room?? I found a lever that lowered the bridge, farther south, but the north bridge is still up, and no lever there./

I completed the dungeon 3 times without any problems. After that I obtained the Master Dungeon Guide and went to complete the dungeon for the fourth time. I managed to kill the boss Grelk Icelash on the second level and he dropped the Boss Key. As I was clearing the second level, a new build of the game was made available, and I was not able to zone to the third level of the dungeon, even though I managed to open the Boss Lock in front of the portal leading to it.

At this point I zoned out of the dungeon and tried to run it again. Next 4 runs the boss did not spawn, so that led me to believe that the game preserves the state after obtaining the Boss key. Sure enough, after I abandoned the quest and took it again from the NPC, the boss spawned on the first subsequent run.

I believe that the boss will not spawn on subsequent runs if the dungeon was not completed during the same run in which the boss was killed. (I have not been able to test this thoroughly, because I have only one character in GW:EotN currently)

I have had a similar scenario where I was forced out of the game while after killing Grelk. On subsequent runs Grelk did not spawn. Abandoning and req-aquiring the quests rectfied the solution.

I was in Hard Mode and had just vanquished the area. Decided to go ahead and get the dungeon out of the way. I freaking HATE the dungeons..do them once and that is it. So, was moving through pretty well, opened the first lock, moving past the rez area AND 'boom' a spawn of 12-14 vaettir. That wiped me and the H/H pretty quick. After rez, we were right in the middle of them but lucklily I was able to pull most back through the door. Three deaths by myself and at least that many by the rest and we had managed to kill them all. So, that one spawn took me and the team from +6 morale to -20 to -55.

I have dropped a Cobalt staff from Bloodstones final chest, should that not make it exclusive for here? If so can someone fix it please.

I found a White Crab in a very strange position of the 2nd level. Here's the image: 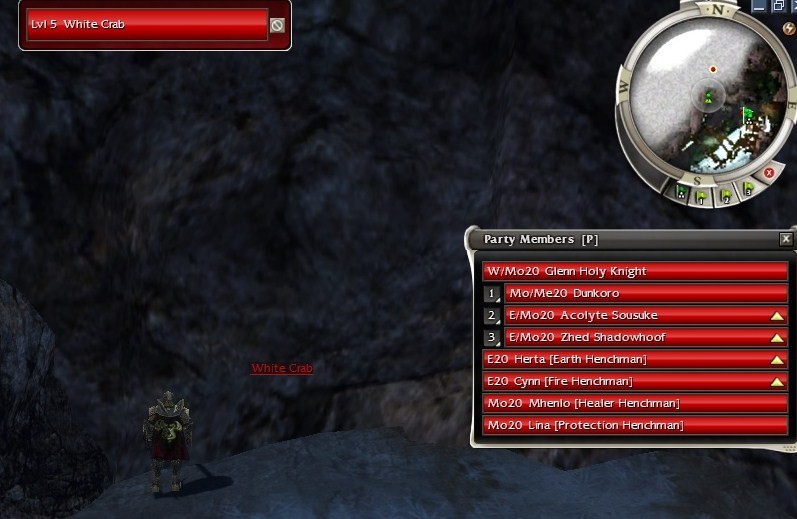 I found a similar glitch in another dungeon (sorry can't remember which one) where some tameable pet was outside the normal area. I would give more specific details, but I don't have a photographic memory, nor did I remember to SC it.--

SC2 is either gonna be awesome or a huge disappointment.

I honestly did not understand that joke at all, Gimme.--

SC is a common abbreviation of StarCraft. And everyone knows SC2 is gonna get bestseller by a LOT even if it's a cardboard box full of styrofoam peanuts --Gimmethegepgun 04:19, 29 January 2008 (UTC)

So was the seventh Harry Potter book, and it was similar to a box full of styrofoam peanuts.

Oh, I've never even heard of StarCraft before. I meant screencap--

Your youth and naivety disgust me.

I'm only a casual gamer, not hardcore or anything. GW and Halo are pretty much the only games I play.--

Joke aside, the crab was probably in a hidden area unlockable via Light of Deldrimor. ♥Thoughtful♥

Oh, you play Halo. That explains it.

So the kid hasn't played Starcraft. Who cares? Stop being jerks.

Responding to comments a year old is cool.

You did notice that comment is also old? :P ---

You're a half-day late to the party, Viper. I'm afraid your comment is hopelessly out of date.--

Anyone else notice the similarity in structures to those in Sorrow's Furnace? Namely some of the buildings and hanging "mines". --Powersurge360 03:30, 29 January 2008 (UTC)

I was wondering roughly how long this dungeon takes to complete on normal mode, with an average group? --Blacktiger92 20:27, 30 January 2008 (UTC)

Anyone got any tips for doing a HM run? I'm usually having 2 people with heroes do the dungeons, so sometimes a pain. This was brutal massacre on my team of 7 people+hero >_> Swordofcerberus 06:06, 28 January 2009 (UTC)

I joined someone who ran this dungeon and he suddenly died at second lvl. We already had the boss key from Glerk Iceslash. We all had to die in order to spawn at the next rez shrine and there was Glerk Iceslash, but his name was 'white crab'. I couldn't make a screenshot cause the button didn't work...82.72.233.33 07:27, 20 May 2009 (UTC)

Yeah I know the bug. I sometimes meet Modniir who are called Polar Bear. Would like to try and Charm them :P If I'm home I will look for a Screen -- 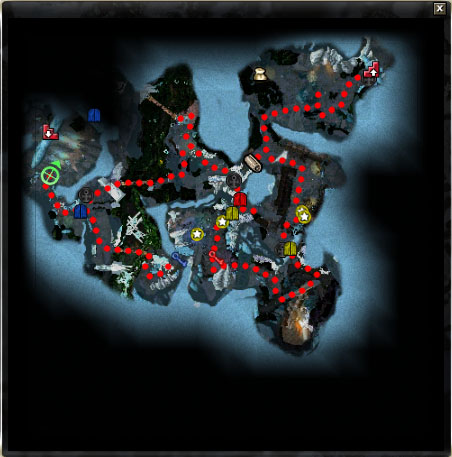 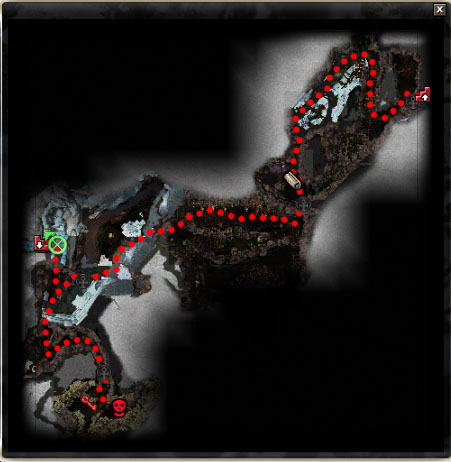