Ranger condition removal is not here

I think he means Antidote Signet, which does NOT cure deep wound.

Quote: It also reduces healing used on that player by 20% Can anyone confirm that this is (still?) in effect? It does not appear documented anywhere. --Bishop 04:37, 27 February 2006 (CST)

Incredible. Especially since that is a reduction of ~31%, not just 20%, assuming your numbers are accurate (which I do). That makes Deep Wounds far better at reducing healing than several of the other skills that do only that -- probably worth a note in the main article. --Bishop 08:42, 28 February 2006 (CST)

My numbers were, in fact, wrong. Here are the correct numbers: 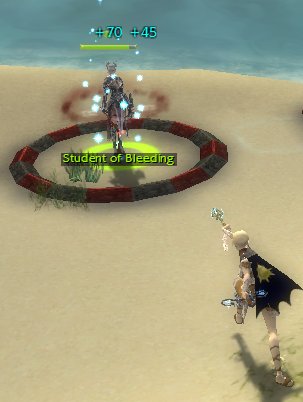 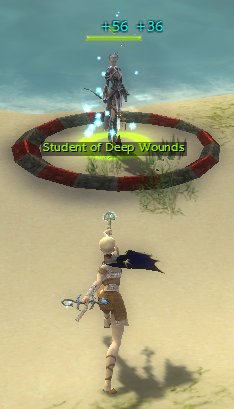 Fair enough. Working those numbers gives 115 and 92 respectively, meaning a reduction of 23 points, also known as precisely 20%. You have, in fact, thoroughly confirmed the 20% reduction. (Personally, I still find that superior to the necromancer alternatives -- but I suppose they stack...) --Bishop 09:08, 28 February 2006 (CST)

The less benefit from healing is documented in the game... mouse-over the deep wound icon when you have it. It just doesn't specify the 20% less benefit. -PanSola 05:35, 27 February 2006 (CST)

Might also be worthwhile to mention the (perhaps obvious) fact that since it doesn't also decrease the damage a wounded target receives, this condition in effect increases applied damage by 20% while the deep wound is in effect, as long as you finish off the target before the condition either expires or is removed. --Semantic 00:40, 18 May 2006 (CDT)

I'm sorry if this isn't the proper way to edit a talk page, but I just thought that it should be noted that Golden Fang Strike needs to be added to the list of skills that add a deep wound. In addition, you don't even need to hit for the deep wound to be applied (http://www.guildwarsguru.com/forum/showthread.php?t=10197576) -Sqube, 1:13PM (EST), 9/14/07

after recovery from deepwound[edit source]

I should run some further tests and clarify this article up. I think it is calculated after DP too. (which means if your max health is increased 10% by a moral boost you lose more than 96 maximum health). --Draygo Korvan 11:25, 16 June 2006 (CDT)

Interesting, so I'm wrong in my assumtion here as far as max health goes. its truely 500-400 as you say. but a -100 cap, interesting. That calls for further testing. I suggest sticking Vital Blessing on a character and applying the Deep Wound.--Draygo Korvan 12:06, 16 June 2006 (CDT)

Interesting, I would say this is sufficient proof to add it to the article itself, that deep wound caps out at 100 maximum health lost for level 20 characters. --Draygo Korvan 12:16, 16 June 2006 (CDT)

Does anyone know for sure how these two mechanics interact? I've done some testing after seeing some strange practice dummy behavior, and degenerative conditions don't appear to take Deep Wound into account. To test this, simply strip and stand between the students of deep wound and bleeding. Once you get to 1 hp, you should remain standing for approximately 16 more seconds, which is exactly how long you would last if you had max health. I've seen suggestions that the deep wound doesn't really 'take effect' until you take direct damage after the wound is applied, but I think I've disproved that theory on practice dummies - at least in so far as degen is concerned. One interesting note, if you switch to a health modifying weapon (even +health) while at 1 hp and degen, you will immediately die.

My original test consisted of this assassin combo on a target dummy:

Any target dummy will remain standing for a few seconds after appearing to run out of health. This fact does not change if you give the target an additional strike after the Deep Wound is applied.

In reference to the Deep Wound not dying problem, I found the following quote taken from the Health Degeneration article on GW Gamewiki:

"Reduction of maximum health cannot, however, reduce a creature to below 1 current health."

This seems to me like the problem is the interaction between the Deep Wound, degeneration and Health is the order in which they are logically applied.

It seems to me like what must be happening is that at every instant, the Degeneration is subtracting from the regular maximum health value, so decreasing from 100 to 98 health in one second for instance, and then AFTER that, the Deep Wound is applied, which reduces the health from 98 to 1 health, as the Deep Wound can not reduce a creature to below 1 current health.

Thus, as degeneration is constantly taking from the invisible normal hit points, which are only later reduced by Deep Wound, the degeneration itself will not allow health to reach 0 until the invisible non-Deep Wound health reaches 0. It will simply stay at 1 health, as long as the targets non-reduced normal health value stays between 100 and 0 hit points.

This would explain a lot. I should let the degen run out before adding a D/W then. Otherwise, the only benefit from D/W is the reduced healing since the health reduction won't matter while under health degen from what you are saying.

apply deep wound-and then deal a tiny bit of damage right when your target is at "1" health to finish him... no reason not to apply degen

Ok So tell me if I'm Right.

If they are at 100 health and you apply a deep wound, they are at 1 health. IF you then apply degen then they start losing health as if the deep wound was never there?--

We need to add the new skills that cause Deep Wound there. I am not a student of skills and conditions myself, but I think Accumulated Pain is one. --Karlos 15:47, 17 June 2006 (CDT)

"The visual indicator for Deep Wound is a small downward facing brown arrow on the enemy's health bar."

Isnt that the same indicator for ALL conditions? And if so, shouldnt it be removed so people dont htink they have deepwound whenever theyre bleeding or blinded etc?

If a target is hit with a Deep Wound while being effected by a deep wound does the duration extend to the newest effect and does the target lose another 20% health and/or maximum health again? Essentially, is it beneficial to give a deep wound again to a target that is under that condition already?--Vallen Frostweaver 14:26, 15 August 2006 (CDT)

So then feasibly it could be beneficial to do multiple short lived deep wounds in order to continue doing the health damage?--Vallen Frostweaver 08:41, 16 August 2006 (CDT)

No, because health is readjusted upon recovering from Deep Wound. Either use a long-lasting Deep Wound to seriously inconvenience your target while further whittling it down, or use any kind of Deep Wound as a "finisher" to reduce a target to 1HP if it had 100HP or less. Preferably while they're bleeding - Severgash, a swordie's best friend. --Black Ark 08:51, 16 August 2006 (CDT)

Recent fix:
Fixed a bug with the display of the Deep Wound Condition that indicated you had an incorrect amount of Health.
Just in case you missed it. --

Is this still reducing health? I have been inflicting deep wound and it now just shows the gray area of the HP bar but does not take away life. eTiger13 19:07, 14 April 2007 (CDT)

I was using the A/W Spike build which uses impale. I use Impale, then I strike with my daggers once and they lose over 15% of their health. What does this mean? Atlantis 23:22, 1 November 2007 (UTC)

From what I understand, the health drop isn't displayed until you damage the creature again. Their health is still lowered, you just won't see it until you hit them again.

before it was as if deep wound would only have an effect if the foe took damage/life loss that made yellow minus signs appear...

How does Deep Wound affect skills that trigger on targets under 50%?