It's not a curtain. In japan, in funeral, the a picture of the deceased is shown with two black strips on its top corners. The picture is usally in black and white, too. Mithran 05:16, 24 October 2006 (CDT)

MAybe it's because Glaive was not Canthan, but Sogolon Ashes do have the stripes, thought... Maybe for being a Corsair. Mithran 07:06, 23 April 2007 (CDT)

There are actually a few number of spells that would otherwise work on another profession (Terra Xin 10:27, 7 October 2006 (CDT))

Possibly the 10 second recharge had something to do with elite status? Not like Rits have many enchantments anyway. Oh, and the huge area, that too. And that one second cast. --Khoross 05:24, 27 September 2006 (CDT)

I imagine that losing all enchantments is the "downside" for the skill's otherwise pretty fair power. On a dervish, the supposed negative aspect becomes a positive. Bubbinska 19:19, 28 September 2006 (CDT)

This is really good with Dervish though. All those enchantments that cause conditions when they end means your gonna have a target who will be suffering really badly.--Deserth 16:46, 7 October 2006 (CDT)

Imagine the power if it were "For each enchantment lost". Destructive teams would rule the land, with 4/4 split enchant teams with dual glaivers. --Mgrinshpon 09:00, 21 October 2006 (CDT)

The use of an elite spot is questionable, at best. Still, for PvE, I imagine a build casting Destruction, running in with Cruel, then using this after dropping Cruel, then Swap with the Destruction Spirit, then Ancestor's Rage on the spirit, then Rupture Soul. Nice damage. And you don't even ever have to change targets from the spirit. But this skill plays such a small part in it that it really highlights why this isn't all that elite. Llava 23:31, 25 December 2006 (CST)

This is a PvP skill. You got Dervish/warrior tanks out in front beating people, and ever 10 seconds you could have 4-5 rits cast this spell on'm. Shock->Destructive was Glaive (X5)->Ancestors' Rage (x5) ->Drop item. Maybe find a way to get a KD with the paragon shout "Help Me!" to speed up the spike... and right there you've (armor reduced) 530 in the area lightnin damage for 1/2 second, and an additional 530 adjacent lightning damage after another 1 second or so. Faster than most spikes I've seen, actually. --Crazytreeboy 09:59, 16 January 2007 (CST)

The original name of this skill was Destructive was Zuuyun . It raises speculation that this skill was intended to be capped in Factions, because the name is related to Zuuyun Point. That must have obviously changed.(Terra Xin 05:07, 24 October 2006 (CDT))

At this time, Destructive was Glaive does not trigger when you drop the item (but you still lose all enchantments). Instead, the skill will act as though you are still holding the ashes, and will cause the AoE effect after the damage has been dealt. Also, this item spell is acting as a targettable item spell, so you can give it to an ally, basically... funny that. (Terra Xin 22:53, 15 November 2006 (CST))

It does the damage when I dropped it with no enchants on today. There is a second lightning flash every time it rechages, but with no damage. It's targetable because it's not an item spell... --Buzzer 07:20, 24 November 2006 (CST)

I think that's what makes it cool. You can cast this on a dervish ally with 16 channeling, then he can drop the ashes and blast'm with his 16 earth prayers enchants. Drop'm at 9 seconds and throw an Ancestors Rage in there, and you've some insane damage. --Crazytreeboy 23:59, 5 December 2006 (CST)

So does said ally get the ashes, or do you? That seems like a way for PvE casters to get rid of warrior idiots. Take away their sword.Twinkie Doomcaster 03:28, 10 December 2006 (CST)

If you target an enemy or yourself you get the ashes. If you target an ally they get the ashes. If you let the spell expire instead of manually dropping the ashes it won't do anything. Also, as far as I can tell, heroes are too stupid to drop it so they just run around like headless chickens until it runs out. You can't get rid of human controlled warriors though, since they can just drop the ashes.Darth Executor 20:51, 11 December 2006 (CST)

Maybe it's just me but when I use this spell I can only target myself. Has anyone else had this problem?

It's still bugged. The damage doesn't happen until the 10 seconds have passed, independent of when you dropped it. Useless that way.

It seems it's not really 25% AP like it states, but around 40%, according to the GwG calculator. Regardless, it makes rits better spikers an air elementalist (not that they are overly powerful), even if channeling has less utility than air. Rits have restoration to make up for it. It'll get nerfed (or just fixed), but until then, hitting for nearly 200 for 5 energy is loads of fun. 74.244.17.119 15:41, 20 January 2007 (CST)

I guess it was kind of overkill.. yet 5%, if that's what they do--wouldn't add much at all, either? The 25% made the normal 63 Damage at 16 Channeling on Renewing Surge skyrocket up to 90 some damage on a 60AL target... It was impressive. —

Does the AP apply to a skill like ancestors rage that doesnt directly target a foe?

I keep not seeing any note about casting on allies, and I swear I've added it before, so I didn't add it again. But I do think it's VERY significant that this spell can be cast on another ally to give them an item. --Crazytreeboy 23:28, 12 March 2007 (CDT)

I am not sure if this should be added as a note on the main article but due to the wrong spell type hero like Razah or any Ritualist secondary won't use this skill to get the synergy for Channelled Strike or Renewing Surge ... In fact, I never saw my Razah use that spell at all. If someone can test this too maybe it's my build that doesn't work with his AI. --Infernal Aura 15:40, 14 April 2007 (CDT)

Say I was to use skills that deal damage when ending, like Aura of Holy Might and Mirage Cloak. Would the AP apply to that damage? EDIT: nvm, noticed skill description - (snō hwīt tăn) [sic] 07:13, 4 July 2007 (CDT)

This only works on skills who's damage is reduced by the targets armor (I know this seems obvious).

I removed the note saying that the animation doesn't occur until after 10 seconds have passed as this was fixed.

Did anyone else notice the animation for this skill occurs on the enemies affected when dropped? I'm not sure if it's my computer or something else but when I dropped this in PvE, there was waaaay too much lightning, like I couldn't even see the ground too much, like "what the hell happened?" too much. Someone tell me what they see when dropping this near an enemy! -Hesus

I thought that always happened with this skill. That's one of the few cool things about it. 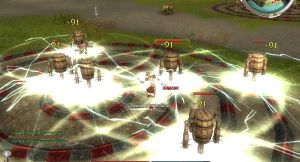 Is it possible to hold up two items (item spells or other items) since this isnt technically an item spell?Fire Tock 00:06, 12 October 2007 (UTC)

If you go to the place in Verdant Cascades with all the crocidiles and drop this, its hilarious.Doom Box 21:41, 10 March 2008 (UTC)

If u used say sundering weapon for example on a frontline war while under this. Does this give that warr the 10%AP from sundering and then a further 10% from this skill? PVX-Zuko 16:29, 12 March 2009 (UTC)

Oh. I don't suppose there are any Rt skills that have an inherent 25% ap or something?--

Wat. Renewing Surge is shit. Just because this meets the requirements of renewing surge, and boosts renewing surge's damage slightly doesn't mean they "Combine very well". It'd be like saying "Pious Restoration combines very well with Life Attunement". "Combines very well with Channeled Strike" would be a better note. I'm removing it unless someone can explain why it's such a good combo.--Darksyde 18:59, January 24, 2010 (UTC)

Just because RS sucks doesn't mean they don't synergise. Imo, list both or neither. ---

There's synergy in lots of things, but we shouldn't be promoting stupid synergy. Like saying people should use Flare with Arcane Zeal. Right?--Darksyde 05:07, January 31, 2010 (UTC)

AZ's note would boil down to "AZ works well when using spammable spells, such as orders." which is a general note and what it's used for most often (which is a pretty dumb usage if you ask me, since heroes blow with it). ---

No. You don't mean that. Each of my character first need to get 10 tormented weapons for HoM. ;)