Are we sure its going to be a Grasp mask? Could just be a picture of one of the people dressed up as Grasp's during the quests and events. PossessedLinebeck 21:05, 4 July 2008 (UTC)

They always do a render on the event page before it turns out to be the real deal. This is how many of the more recent ones got discovered ahead of time. Also spares some QQ'ing over not knowing the details though since the overwhelming majority of 12 y/o's still spam "when do we get mask" or "what is mask this year" I wouldn't count on literacy to get the info out. 98.219.48.111 00:24, 5 July 2008 (UTC)

Someone's listed it as GMT-7 when it's always been GMT-8 - I've just been in the Shing Jea Monastery patiently waiting at 7pm as listed on the table and Kisu hasn't shown up - I realise someone's listed the times wrong so I'm gonna change it Saul Lachance 18:10, 6 July 2008 (UTC)

Oh I just checked the official site and they're listing it as GMT-7 ... they've cocked up but there's no point in me changing the table because people will just moan it's what it says on the official site oh well Saul Lachance 18:14, 6 July 2008 (UTC)

GMT does not change for Daylight Savings, so GMT-7 is correct. —

I did, in fact, as well receive 26 presents, however, I am unable to explain why. Harem

I had two characters in a finale, one received a festival present about 40 seconds ahead of the other; at the end of the drops, that one had 13 and the other had 12. Another player with two characters reported 12 for one and 26 for the other. Separ 03:46, 7 July 2008 (UTC)

In the last finale I received 27 festival prizes in one finale. I couldn't tell you how fast i received them, but I did not receive this many in any of the other finales during the day --Musicfreak1701 06:13, 7 July 2008 (UTC)

I leeched on both of my accounts for the last 2 finales. One account got 25 and the other 50. Examining the chat logs, the drops came at an increased frequency for one account for the second event (all that was visible on the chat logs) and given the final festival prize count, for the first event as well. Each character had been at previous finales, but this pairing had not. The things I know that was different for the character that got more from that character previously was that I had 141 Creme Brulee in my inventory, a bit more gold and a bit more experience. This, of course, does not mean that any of these conditions are the cause of the doubling, but it is the only difference that I can find. Something to experiment on next year. Separ 11:12, 7 July 2008 (UTC)

I was disappointed to see that many players don't understand we don't have to *compete* in the Celestial minigame, we have to play as a team. If a Grasp comes towards you while you carry a Celestial Charge, you obviously drop it to avoid being killed. But most people just steal the charge from you and, of course, get killed. Not to mention the leechers :( The Masquerader 19:39, 6 July 2008 (UTC)

Usually when it gets the the point that other people want the charges enough to steal them and blow up right in front of me, I say "I don't really need stray tokens in my inventory, you guys can have it" and go dance someplace. There's enough people playing the game at that point, so leeching is irrelevant. Now if there are alot of charges just laying around, yes, shame on the leechers. 71.51.109.171 01:38, 7 July 2008 (UTC)

I was disappointed too - the amount of time that ive had my celestical charge 'stolen' from me as i dropped it to avoid grasps Ive lost count, its sad that other players would stoop to stealing just for 1 token???? & it wasnt as if we had so many people participating that all the charges were being picked up as soon as they dropped. So thats how far the Gw community has been degraded by players with no sense of fair play, moral values & most importantly RESPECT towards other players.... 78.146.215.120 11:03, 7 July 2008 (UTC)

It says that when you are caught by the Grasps with a celestial charge you have to wait 30 seconds to be rezed, but in each occasion where I was caught I didn't have to wait at all. It may only rez you at 30 second intervals but I didn't happen to catch what time I was killed at so I dont know. In either event I'm removing it now. If somebody wants to test if there is an interval they can, but I'll remove it now. Born to Mes 00:47, 7 July 2008 (UTC)

Some screenies, if someone wants to add them to the proper pages, or make a page for them: 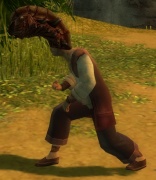 I compared the in-game dialogues of these festival quests with last year's versions and there did not appear to be any differences (certainly nothing like the changes made between the 2006 and 2007 quests). There has now been 2008 versions of the quests created, which look basically the same as the 2007 versions, and it's fair to assume at this stage that the 2009 quests will also be the same. So am thinking it might be a more efficient (and less confusing) if we were to move the 2007 versions back to just the plain quest name, and have both the 2007 and 2008 Dragon Festival articles link to these, keeping the 2006 for legacy reasons. This approach would then avoid starting the trend of having 2006, 2007, 2008, 2009... versions of these when really not warranted. Anyway, before going ahead and changing anything, can anyone come up with a valid reason for keeping it as is? --Wolfie

Eh? Not sure I understand why that is needed (I'm talking about the "Rampaging Yetis", "Shrine of Maat" etc quests here, are you thinking of the 7 festival missions?) --Wolfie

Undo changes to this page[edit source]

Anyway, I don't really know how to use Wiki.. Please revert this page to how it was previously.