I added this page just for people unaware of the gloves, no picture is provided at the moment because the market on the material costs is around 125k alone, I don't think anyone is willing to buy these unless they have an ungodly amount of stored money. Although from comparing the icon picture, I suspect the Male Dwarven Ranger preview picture is sporting these gloves, as is he wearing the Mask of the Mo Zing headgear which is also not part of the Dwarven set, just misc. armor. Psychaotic 04:48, 5 September 2007 (CDT)

Quite a few of the armor preview or even armor pages seem to be listing the universal 1 piece armor as part of a set, or displaying it as part of one. Makes determining what the set actually looks like quite difficult. I know people are proud of their chaos gloves and dragon gauntlets, but that is ridiculous. -Gildan Bladeborn 13:14, 6 September 2007 (CDT)

Oddly enough, I have almost all of the mats to create these. I only need a few steel, and the rest I can make because I made too many when I went to go make my Elite Platemail ages ago. Nilator 11:03, 5 September 2007 (CDT)

They're not that expensive, i bought my warrior some of these today. I already have the scales saved up, bought 50 deldrimore scale @ 850 per piece. The fangs are only 1.1k and the eyes can be bought for 100g each from the trader.

They're certainly nowhere near as expensive as the chaos gloves.

True, nowhere near as expensive as those, 75 ecto is just pushing it, but 250 scales in the current market will run you 80k, idk who is willing to buy such expensive gloves instead of oh say, a full set of 15k armor. But I suppose it would only apply to those people who dont have any materials stored away, because buying all of it from scratch will hurt.

P.S Why oh why oh why could we not get a full armour in this style, instead of substandard reskins? :Wakers

Can anyone add a picture?

You forgot the 250 scales which is where mos the price comes from.

I just bought these for my ranger yesterday (they look BA), i had around 30 scales, 3 eyes, and 2 fangs, and the rest of the mats + the 10k cost put me to around 55k, so it would probably not be above 60k if you bought all of the mats (by the way, im broke now, but it is soo worth it)

For those of you that are cheap, you can get the gloves for around 30k depending on what materials you have. you just need to use the Artisans to get the Deld steel it will be ALOT cheaper than if you bought the Deld steel from the Trader. for instance, now the price is 800g ea. if you bought all the ingots from the trader it would be 40k if you use the Artisan it will be around 10k savings of 30k.

theres another page on dragon gauntlets should we delete that one? this one seems to be where all the talk is goin onDuanehaas 10:18, 7 September 2007 (CDT)

Yes, I believe that thread should be deleted. Good catch on that one! -...because the Goddess wills it so.

The notice says that there are different skins of these gloves. Seems weird to me, but I suppose it's necessary so mesmers aren't overpowered by beefy warrior gloves and so warriors aren't looking like pansies in dainty gloves. Does anybody have images of the other skins? It would be nice to have them all posted and labeled. -...because the Goddess wills it so.

I do heres female mesmer 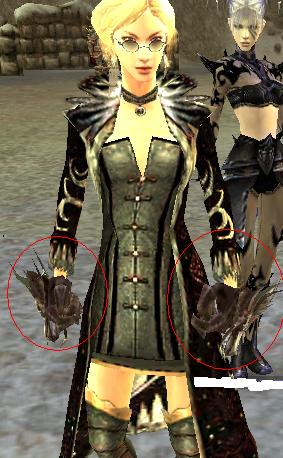 That's your Mesmer? If it is, then it would be very helpful if you could take screen shots of the gauntlets like the pictures on the main page here (front & side views), and post them as the "female caster" version. Thank you! -...because the Goddess wills it so.

Sorry its not but if you go to grotto there are plenty of mesmers with them and they probably would be for than happy to do pics for u. I Owned u 19:16, 9 September 2007 (CDT)

Since many professions seem to have different skins for these, it would make sense to make it a complete table with an entry for each profession, male and female. This would be most helpful, considering it's no comparison between, say, female mesmer and ranger. RoseOfKali

I'm not sure that one for each profession will be necessary...if necros, monks, eles, mesmers, and rits all use the exact same glove, then that's 5 copies of identical pictures. I agree though, that a male and female version of each type of glove should be shown. Each different skin will ideally be displayed with all professions it's used for listed with it. -...because the Goddess wills it so.

.... just wondering.... does the glove get bigger on mesmer...if...let's say...she is wearing a sleeve-less top instead.. such as Enchanter or Elite Kurzick.... this goes the same with other gloves... like chaos/destroyer..... because short gloves just doesn't looks as nice..

I highly doubt that. While I agree that longer gloves do look nicer, I doubt very much that the armor is "smart" and knows whether or not the arms of a character are covered by chest armor. -...because the Goddess wills it so.

Thats correct, the gauntlets do not scale according to the top piece. It appears that for the common hand armors, because mesmer armor normally stops at the wrist, such is the way of these armor, including the Chaos Gloves. I believe that the smaller gloves are not generalized to all casters, just mesmers.

Yeah does anyone have these for a derv (hopefully in black primeval and a male)? --

Seriously, I don't get why people don't understand this. These gloves are HUGE. It's not a bug, it's just a case of ridiculous size. Next people are going to tell me about how Staves clipping into Elementalist Elite Canthan armor leggings is a bug. --Curse You 22:43, 12 September 2007 (CDT)

Honestly, I haven't been in-game in so long that I can't verify this...I just switched it from "BEWARE!!" to the 'bug' template. Take it out if you think it's wrong, but a note should still probably be made on the page that does happen. -...because the Goddess wills it so.

Sorry if this is in the wrong space but seriously, are there any shields which these gaunts DONT clip w/? or do i have to go W/D w/ a scythe all day? i HATE how it clips, very unprofessional. . . can anyone find a shield that actualy WORKS w/ these gaunts? Thanks Knurlnien Brisingr 05:47, 19 November 2007 (UTC)

i completely agree with the guy before me.. the clipping is reallyyy annoying! anyone found a shield it doesnt clip with?

OMG, just had a great idea! i was looking at my character... feeling annoyed about the cipping.. then i thought 'ok, the right hand which holds the sword looks fine, no clipping there, great... but the left hand with the shield looks like a joke with the huge glove part coming out..' there should be an option to take the glove off one hand and leave it on the other one. the right hand is great with the sword and it would look much better as a whole if we could equip like another glove for the other hand so that DOESNT clip. anyone else agree? -seb

And then they could have an armor called "Power Glove". It would be so bad.

And this is where you pick out a nice hammer... RoseOfKali

can these be dyed

Yes the horns are dyed

Can anyone put up a picture of a dyed pair?

- Thanks Seiiko, I added the images and renamed them for you. If you'd like to read more about how to help read the GuildWiki:Style and formatting/Armor Guide. Krytan Sentinel 23:45, 10 December 2007 (UTC)

IS PATHETIC, considering how popular these are... Does anyone have these and is willing to post the proper images? If you don't want to bother with cropping, saving, etc, you can loan them to me (don't worry, I have no use for customized gloves, I'll give them back), and I'll dye-preview both male and female, in gray and color. This page hurts to look at... RoseOfKali

You're right, even though I'm a bit late, I uploaded new ones for the male version. --

Yeah, same here, I can see the correct image when I click on it, but it won't update the gallery, even if I Ctrl+F5 both the Image page and the gallery. >_< This has happened before on Image:Eternal Survivor.jpg, and I finally fixed it MONTHS after the initial upload of the new image... Wiki images are borked. :( RoseOfKali

Maybe you could flag the images for deletion, just drop me a message and I'll reupload them then later. --

You can flag them for deletion yourself, just type {{delete|Problems with image server, will re-upload soon}} on the image page itself, above the licensing. RoseOfKali

Yeah, yeah I know you do not keep track of price's but I have figured that these will cost around 60k-65k

Hope this helps anyone who is wondering about the price as of November, 10, 08. If any prices are wrong please feel free to correct me, yell, and scratch me if necessary because of the Wikia not keeping prices and, Rose if I get these anytime soon (after Primeval) I will try to finish the male gallery undyed then red because i'm a Luxon and well, thats our color ^^--Toolbooth death 03:07, 11 November 2008 (UTC)