Speaking of this, does Fast Casting or items that increase casting/recharge time work on the snowball skills? --Xapheus Sadalfas 01:51, 22 December 2006 (EDT)

I think the eggnog being awarded to the losing team was a bug. The losing side doesn't get any eggnog anymore. -- Technohawk

If it's been removed it would have been because everyone was throwing the fights on purpose to get alcohol and sell/trade it. :P - BeXoR 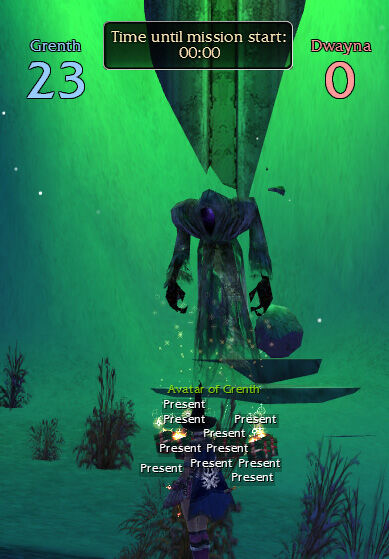 Uber hacks! New build was released while we were fighting. :P - BeXoR

Ok, as opposed to going to bed, I logged back in to check this out. The outpost you end up in is called "Dwayna Vs Grenth" so we should have a corresponding Dwayna Vs Grenth (location) location with the info from it. What we want to call the PvP I don't know, I'm okay with Mission. --Rainith 02:49, 21 December 2006 (CST)

Should we name all the profesion skills? not just dervish. Warrior has a speed boost skill

Nah, it's the same old Shiverpeak Arena we all love. --Theeth

Possible to get a 3v3 match[edit source]

A 3v3 match taken after winning.

I some how got into a 3vs3 match. Has anyone else had this happen and does this happen in the normal random arena? I assume there wasn't enough people to create a 4v4 but I thought thats what happens when it says restarting timer. I included a screen shot on the right which was taken when the other team left after they lost. I also took 2 other screenshots if you really want them. What's even more strange is that one of the members on the other side had (4) on the end of their name so there wasn't a (3) player. -Smurf

I know that level 20 characters do not get expirience for kills but do lower lvl chars get it? i know it is awarded cuz i see a green 0xp every kill i get

Yes, There IS a formula to how much experience you get, that corresponds with the Level of your character, and the Level of the deafeated. Jay332 05:04, 24 December 2006 (CST)

Does anyone have a screenshot of the record winning streak in this arena? I heard rumor of around 90-something, and surely someone took a screenshot. Xapheus 04:19, 26 December 2006 (CST)

I second this and also confirm that upgrades that shorten casting time also work. Not sure about recharge time (didn't pay attention to that as much) but if all of the above affects the battle, I'm sure skill recharge enhancements also apply. I made a special PvP character just for snowball arena. Each of his armor pieces had a different reducing condition upgrade. His weapon and offhand both had spell casting and recharge time upgrades if I was on Dwayna's team. If I was on Grenth's, I'd switch to the offhand that further reduced Crippled Duration. Xapheus 15:34, 2 January 2007 (CST)

Leaching players are a real problem on these games.

How to play and win section[edit source]

There is 200 bonus balthazar faction for flawless in 8v8 ATS if some1 wants to add.

heya peeps, during SnowballDomminance farming I found out that when you're on the dwayna skillset (aka avalanche) you can still get yellow snow by activating skill 5 on loading the map. done this numerous times, can anyone confirm if this also works in the arena? screeny proof ^^: 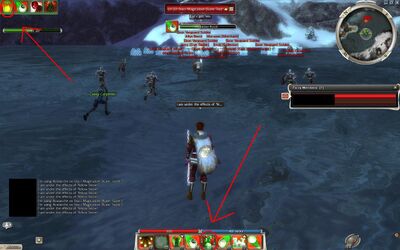