I just picked this up in a eye of the north dungoun :-/ (Fronis Irontoe Lair,dropped by Fronis) I noticed the list did not say anything about GW:EN drops. Is it a bug or did I get lucky? -Yoeri

Its not uncommon for one item to salvage into two different kinds of common material. Axes, Hammers, Grim Cestas, Heavy Armor types...the list goes on. --Gares Redstorm 22:25, 9 May 2006 (CDT)

I found one of these somewhere in Nightfall (I think an Ancient Elonian Chest but I can't be sure). It has a very different skin. - BeXoR 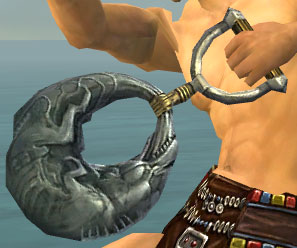